Im relatively new to Elektron but am quickly falling in love with these machines.

So far I have the Model:Samples which I totally love.

Having fallen for the M:S I have my eye on an RYTM Mk2 that is for sale locally at a used good price but Im concerned about 1 thing.

My question is this.

Is it possible to record the sequencer midi out into Ableton Live? I have read lots that it isn’t but then also that it is. Im confused.

For a £1000+ instrument to fit into my workflow I need to be able to capture that Elektron sequencer magic in live so I can arrange/edit etc.

Does anyone here have a definitive answer? All help gratefully appreciated.

[Elektronauts] The Analog Four and Analog Rytm MKI and MKII are leveling up! Boasting a substantial OS boost - 1.40 on the Analog Four and 1.50 on the Rytm - this world-class duo is flexing its Elektron superpowers more impressively than ever before. Welcome to extra performance control, added sequencing potential, and increased machine power. Sequencer MIDI Out With Sequencer MIDI Out you can link up to the rest of your gear with ease. Control velocity, note, and length on every step of the…

to capture that Elektron sequencer magic in live

There are quite a few functionalities of the Elektron sequencer (for example: sound locks) which cannot be captured in any way as MIDI stream, because there is simply no functionality to trigger a specific sound which isn’t the track’s sound on specific step from external.

If I remember correctly plocked parameters aren’t sent as MIDI CCs, too, but at least you can get the notes from the audio tracks as MIDI stream.

So thats a yes then?

Ive watched Bo Beats demo of controlling other hardware but wasnt sure if you can record the midi out in a DAW?

Thanks man! Appreciate it.

I think I may hold off to be honest if its as basic as you say.

Is it just sound locks it cant send? I assume it will still send all the conditional trigs/chance elements?

it will send a note for any that it actually plays, whether sound lock or normal note or conditional (if condition is true) - yes it can be fun with conditional stuff

Thats what I thought. That it will send and actually played note data. Which is what I wanted it to do.

For jamming I will still have the midi triggering the the RYTM, if I buy it that is…

I dont actually need it for other gear tbh. Live sequences my other synths more than capably so sounds good in actual fact.

I just need to weigh up if its worth selling my TR8s and the M:S to fund it and go all in on the RYTM as my only drum machine.

I do love the workflow and the idea of total recall in OB. The sound too obvs.

How hard is it to set up if I were for arguments sake running it via OB?

running it via OB?

I don’t see the appeal of offloading the note data to a sequencer (though many do) but it won’t be too hard - it’s outsourcing something the box does far better imho, sure there are ways to use visual tools, but the fact is you’ll be missing more bells and whistles on the device compared to gains of sequencing via Midi

If e.g. you create a great pattern in the AR and you simply wanted it transcribed to a DAW for other purposes, then the basic note data is all you need to make that an easy task

The AR has so much more to it that should be a determining factor in whether it’s for you - you’d have to like the synth/analog side of it imho, rather than buying it for samples (which do sound terrific through it tbh) - think of midi out as a free part of the functionality, justify the outlay on the other features - remember that the Ar Mk1 is sonically the same, just lacks internal sampling and a few added touches (though maybe not as slick an OB experience tbh)

Thanks for the help man. Really appreciate it.

Im going to mull it over and see if I can get a bit more money knocked off.

For some additional info, check out this older Cuckoo video, you can skip to like the last 15 min when he starts talking about Logic: 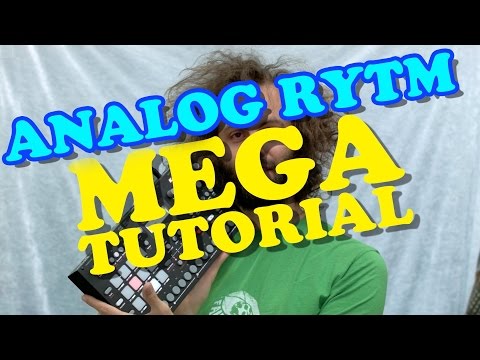 Some things that have changed since the video was made - Overbridge 2 has been released and works well, and the Rytm can send notes information as well - but it gives a great view as to how you can use DAW MIDI tracks and the Rytm together.

Basically, let the MIDI track capture live parameter adjustments, scene changes, mutes, and pattern changes, and let the notes and p-locks be controlled with the onboard sequencer, and you’ve got yourself a super powerful workflow.