Wait…so my plan to have fake plants on top of a vintage Roland Space Echo and green army men crawling over a landscape of broken syringes and opened condom wrappers wont go over well?

hmm…
that was going to be my video debut.

all that doesn’t really bother me, cuz you have to place something if you’re going for a more “interesting” view…its just the, everyone copying with fake plants. @phaelam

The music should be interesting enough on its own. If you gotta dress it up…

i like it tho lol. nice to look at.

lol. wes anderson is more symmetrical tho.
yt jammers don’t get that deep.

If they’re not making a custom visual then I don’t mind the toys and plants as a set dressing. Most of these YT guys are just tweaking the filter cutoff. There’s only so much knob twiddling you can look at before it gets boring!

The curse I have that musicians tend to die right after I buy tickets to their shows.
If Keith Richards dies, it’s probably because I bought a ticket……

Mine: DAWless. Holy fuck can people shut up about being DAWless already. I’ve said it here in the past, but going out of your way to avoid using a DAW even just for recording isn’t some kind of trophy. It’s just making things less convenient.

If you gotta dress it up…

I feel the need to do some set dressing because it’s just so boring for me to look at the same expanse of blank space all the time. And in some cases, the little trinkets (or the beer I was drinking) were near the machine I used in the video anyway, so it was just a matter of bringing them into shot

I will forever drink a beer / tea / etc while making videos though, mostly because people get irrationally angry about it lol “OMG YOU’RE GONNA SPILL YOUR DRINK!” … no I’m not!

thousands of shitty phone-recorded videos from gigs on youtube.
if someone ever released a proper official live video — it’s impossible to find among those.
and what’s even worse, rare video shootings from 80s–90s are totally lost among those too.

careful what you wish for… 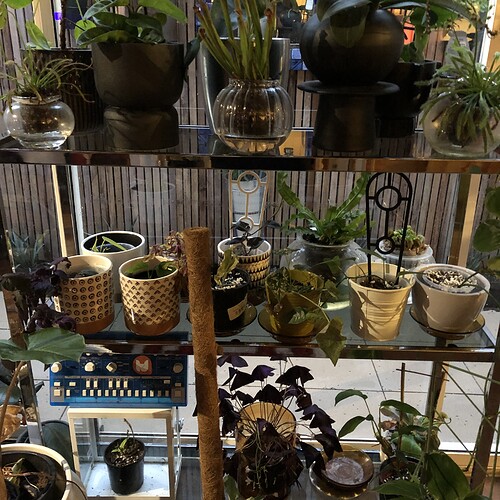 An Elektron special: the lack of portamento.

Hidden parameters in a hardware instrument. I never got on with that part of the Moog Sub Phatty I used to own.

When I bought it the hidden transposition parameter was set to +5 semitones… took me ages to figure out why everything I was playing sounded wrong. I even recalibrated it before finally using the editor and noticing all my patches were transposed.

The fact that this name reaches insane levels of disdain is only made worse by just how much music is put into this category. Mostly by people other than the ones making it by the way. I don’t know of many people who would say « they love to make world music ».

Dammit.
Boingo Oingo was gonna be my next act.
But since I just moved 1 letter, is it OK? Or flip the entire words? Is Cruise Tom acceptable?

You fuckers just looked right in that mirror didn’t you…

And what’s that you’re saying?

This is literally the most excited I’ve been in ages…

That’ll do for now, I’m neglecting my kids.