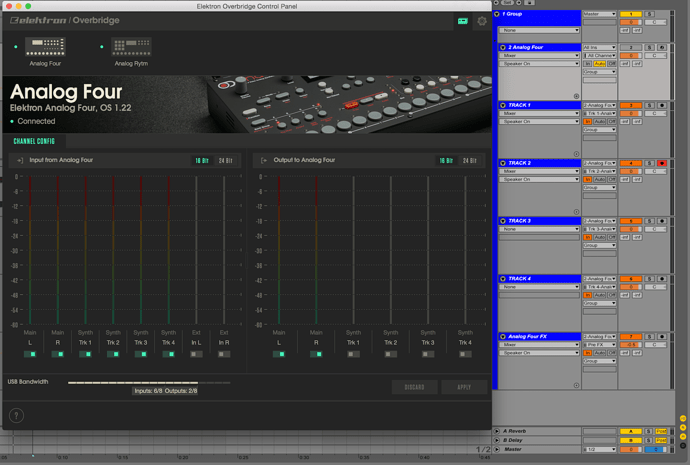 Right, I understand that the FX are on the master channel and so you cannot record an individual track with FX added…

So, what’s the best way workflow wise to include the FX into a live recording in my DAW? I’ve got an audio channel routed to pre FX and turned off routing to the master in OB. Do you guys record each separate track one by one on the FX channel and then l or is there a more fluid way of recording a track with live FX? (Screen shot attached of my DAW setup and OB routing)

i have the same settings. … i dont think there is any elegant workaround. … so sooo sooo sad

A few options, none perfect:

Anfirm, thanks - The AF/RYTM FX are top notch and way better then any software FX (in my humble opinion) so I think I’ll vouch for option 1. But I may start to remove my addiction to the Elektron FX and try and use only the DAW effects in option 3 - that’ll be painful!`TranbanT - I feel your pain!

Anfirm, thanks - The AF/RYTM FX are top notch and way better then any software FX (in my humble opinion) so I think I’ll vouch for option 1. But I may start to remove my addiction to the Elektron FX and try and use only the DAW effects in option 3 - that’ll be painful!`TranbanT - I feel your pain!

Lots of really lovely soft fx out there: I personally enjoy Kjaerhus classic chorus, soundtoys echoboy or primaltap for delay and the valhalla vintage for reverbs. Valhalla ubermod for the more crazy modulated choruses, flanges and reverbs.

Also completely in love with my quadraverb, I’d stick it on everything if I could but I only have one and it lives behind my MS20

I use Overbridge with Ableton and the reverb from my AR through my pre amp, the latancy timing is a bit quick, but using the reverb pre delay brings it into sync. I have a Uad setup for most of my effects, so I am not that stuck for decent delay effects and the Rytm reverb sounds nice and comes in handy when I am running out of Dsp.

As I sat down to record my newest track this morning, which is A4 and a a Roland .wav drum module on the cv track, coming into the external inputs, I was dismayed to see that my installation of the latest OB beta is only allowing for 6 input streams, as it is forcing 2 output streams on OS X.

So, I had to improvise.
The A4 OB plug-in audio wasn’t giving me the Right Ext Input, and that had all my hats and snares from the .wav drum module, so I opted to use the core audio driver to input the 4 synth tracks plus both external inputs.

Yup, all the gooey FX work I had programmed the day before on A4 wouldn’t make it to the recording. Sad, all that time making Performance assignments just for FX. Oh well…

So I went the quick and easy route and set up 3 FX returns in Live 9.6, mimicking the A4 FX configuration. I used Live’s own FX for use while tracking, as most don’t impart any latency at all (quick tip, if you mouse over the title of a Live effect or third party plug-in while they’re loaded in the detail row at the bottom, Live will give you latency info on that plug-in in the status bar below.)
Chorus, Ping Pong Delay (with a utility effect at 60% width), both had 0 latency added. Live’s Reverb added just 8 samples (0.17ms).
This allowed me to approximate the overall sound I was getting out of A4’s stereo outs, so that I could do a realtime recording with a good overall track sound and minimal added latency.

I also went in after tracking to do some track EQ and compression work. A little added filter delay automation here and there in the arrangement, too.

I had planned to replace the Live Reverb with the ArtsAcoustic Reverb, a plug-in I absolutely love, but in the end I was pleased enough with the live reverb sound on this track, as the reverb wasn’t a big part of the track sound anyway.