When you make aftertouch assignments in the FX track with OB (and USB) disconnected, are you pressing the key ALL the way down? It won’t animate until you’ve pressed it so far you hear a little “click”

in tracks 1 to 4 you can see the top-left knob icon animate as you press down, but in the fx track, the icon doesn’t move at all.
[EDIT] i now see that i need to press the FX track button twice to ‘properly’ be in FX aftertouch editing mode - sorry about my ignorance here! However, the next issue still persists in OB:

I’ve reported the flickering AT destinations list to support. Cheers for looking into it Adam.

This solved my stability issues on Win10 and FL Studio 20 with DT. 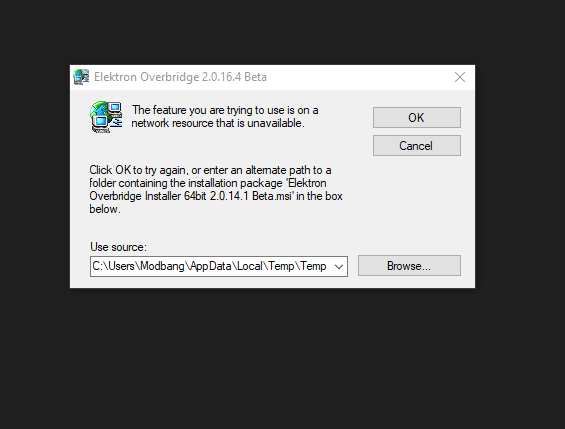 The vst:s still won’t show up in Live 10.1. Even though I made a manual rescan.

Fixed an issue where for some users the USB-MIDI was not showing up when in Overbridge mode.

Can you make sure that the .zip that is downloaded is extracted before starting the setup. In Windows, the .zip looks similar a folder but is not. Right click on it and select extract all. After that run the setup.

If this doesn’t help please report the issue.
How to report issues

Digitone isnt able to connect to overbridge engine all the time. Rythm mk1 and a4 mk1 working without any issues. Sent two tickets but still waiting for a solution.

Has anyone got automation working in Logic?

As soon as I turn on any automation whatsoever I get this glitchy slow down:

Soundbrowser on Analog Keys only displays banks from bank A to H. Anything after that it’s just displaying bank H again.

Soundbrowser on Analog Keys only displays banks from bank A to H. Anything after that it’s just displaying bank H again.

Which folder did you take the files from ?
I took the vst from : “C:\Program Files\VstPlugins\Elektron (64bit)”, copied them to my plugin folder and it works in Live 10.1 on Windows 10

That is how I ran it the first time and many other times unfortunately. Also have ran as administrator too. It won’t even let me uninstall the the previous beta saying the same issues.

Ahaa! I used the dlls from C:\Program Files\Elektron Overbridge. But I switched to the one you suggested and now it works! Thank you so much!

I did the exact same mistake, that’s how I knew

Thanks for taking heed and giving us release notes this time - appreciated and v useful.

Problems with Total Recall. My elektron devices are really confused. Now the OB engine not working at all (after trying to enable Total Recall - doesn’t work properly and now OB doesn’t work).

When working, operation was pretty good, an improvement. Still glitchy blips randomly appear and on first pass or two the sound is de-pitched.

EDIT: Don’t want to spread misinformation. Total Recall is OK. The issue was my own buffer settings being too high from working in a project with lots of plugins last night. OB elektron devices don’t like high buffer setting. Lowered it and it operates as it should.
However, the 2nd thing I said about random blips and de-pitching on first playback pass is still true – but improving with each beta

Edit: With this release Analog Four MK2 is not crashing anymore when loading sounds from sounds browser, thumbs up to devs.