Yeah guessed that would need to have both on stands to get them to sit flush because the mk2 is much thinner at the front and they are such different shapes…
They would be better to both be on stands anyhow to get the best viewing angle.

They don’t say the exact angle on the website on the stands I’ve got I had a look.
I just bought mine and shipped them from the UK so probably just use them for a while,
But if you do design some and hold onto the design
I might want to get them for both in a few months after new year though.

I searched everywhere trying to get matching stands for mk1 and mk2s but there doesn’t seem to be any around at all, So might be good to design them for both anyhow?

Yeah, I’m going to have to design stands for both so I’ll just go that route.

I’ll make a post once I have something available.

Awesome, look forward to see what you come up with.

Same. I’m all over this. Right now I have things on a couple of different levels, but the mk2 OT + A4 + RYTMs really belong together in one row. But then where do I put my Lyra-8

I made the first prototype that simply raises the MKII device in preparation for matching the MKI devices. Still have to work on the MKI stands. Has slots for routing cables under it and a “lip” to keep it sliding off. Rubber screw in feet with metal threaded inserts in the plastic.

An update so you can see progress. 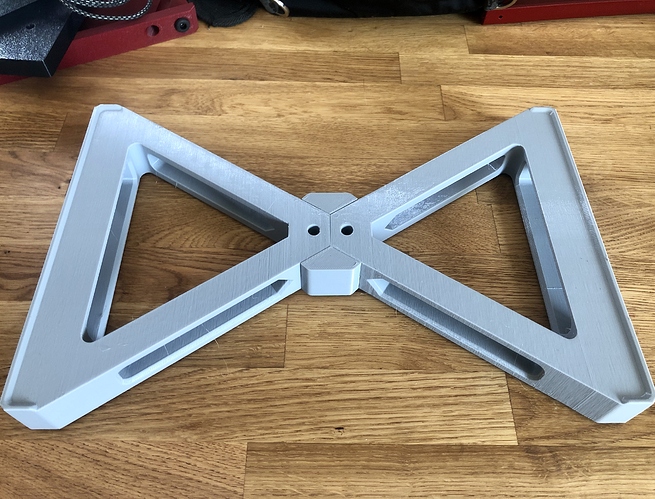 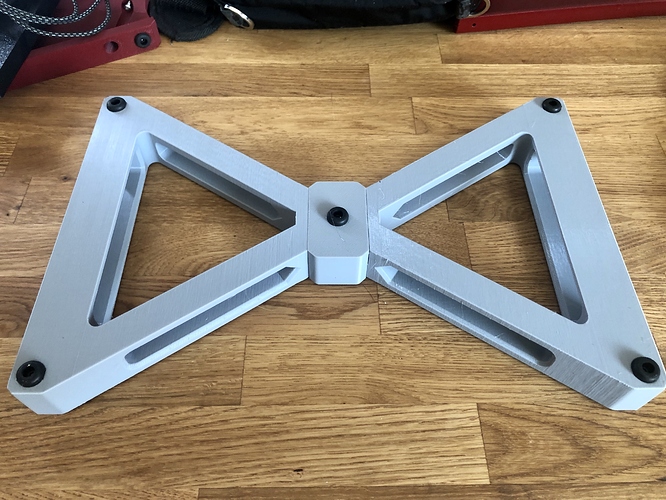 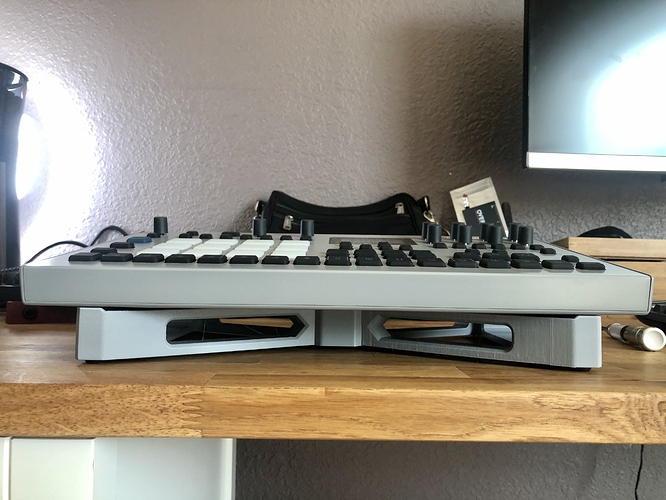 Just making a 10 degree match at first then I will make a stronger angled one. Now to make the matching MKI stands.

FYI: I printed this one at very fast speeds and 0.3 layer height. The final ones will be finer resolution and slower speed for a cleaner print. Also I didn’t really clean up any of the stringy-ness from printing.

@Airyck
Great work. I would love to have some of these for my grey trinity if you maybe have some capacity.

Shouldn’t be an issue as long as you have some patience. I hope to add more capacity (a small farm of printers) in the near future but right now It’ll take around 14 hours per stand (printing slower and better quality).

First I need to make the matching MKI and Digi stands and then I’ll start taking requests for orders. Probably need a few more days before I’m done with those designs.

These first ones are to match the natural 10 degrees of the Analog MKII devices but I’ll make some 20-30 degree ones for both units next.

@Airyck
Great. Looking forward to see more of your work.

Had a small layer shift (printer maintenance) but it looks like it’s a good fit. I kept with the same design theme. 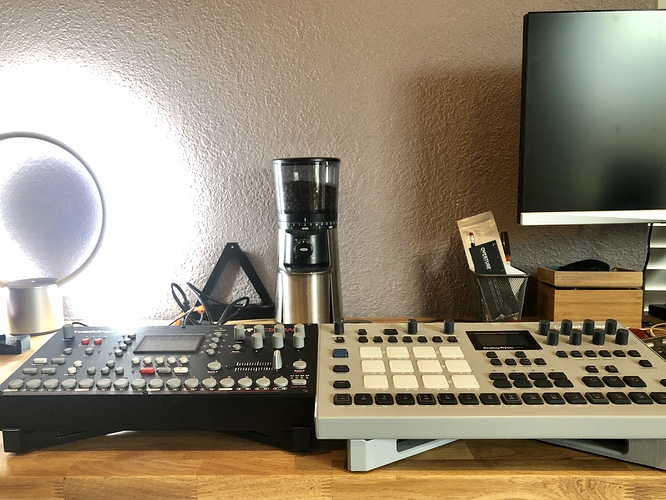 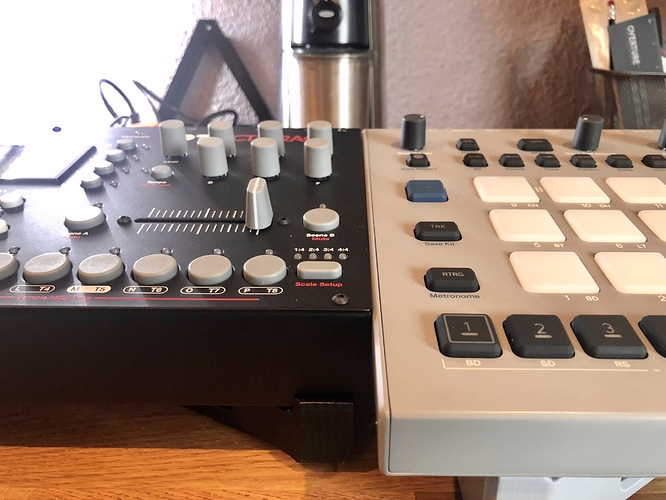 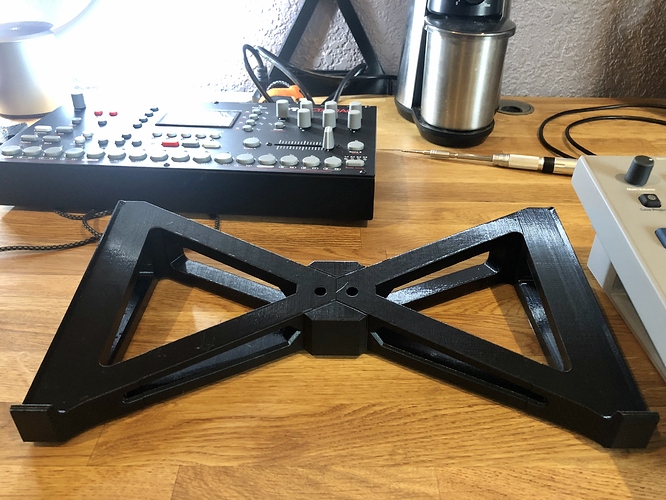 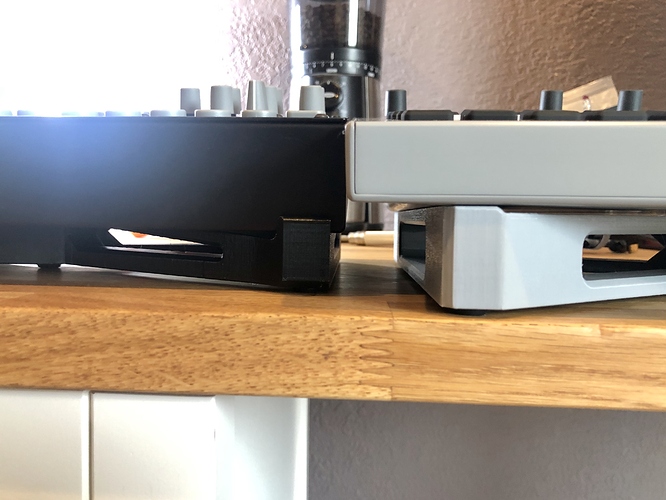 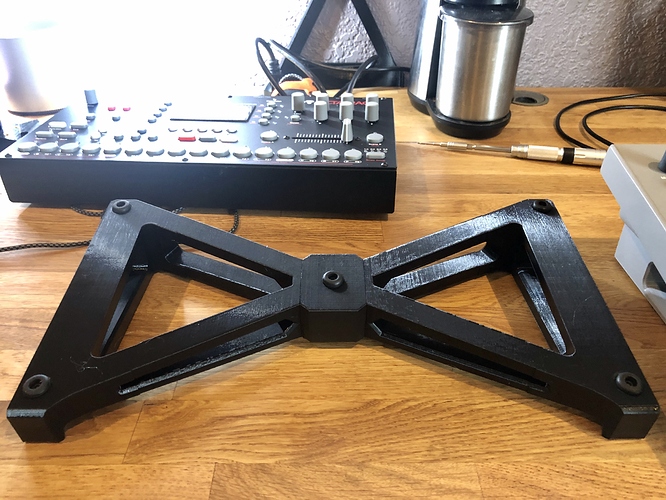 Better photos will come on the final prints.

Coffee grinder cameo, as it played a large part in the design.

Thanks! I’m getting there slowly but surely.

I’ll make a DT/DN version next and then some increased angles.

Each of the stands is PETG (more durable than ABS) And has 7 brass threaded inserts in the plastic like so: 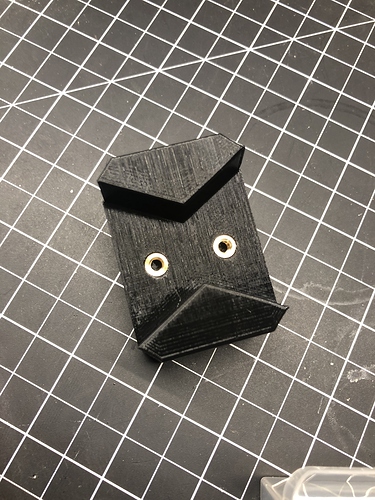 I’m wondering if there’s a way you can set these up so that the DT/DN and OT versions are the same base pieces, but with an additional part for the OT to make the length work?

Just spent the last couple of days building another 3D printer. Should be back on the design track soon.

Busy with appointments for my kids so I haven’t gotten the DT/DN stand done but here’s a crappy picture in the dark of ARMK2 on a black stand. 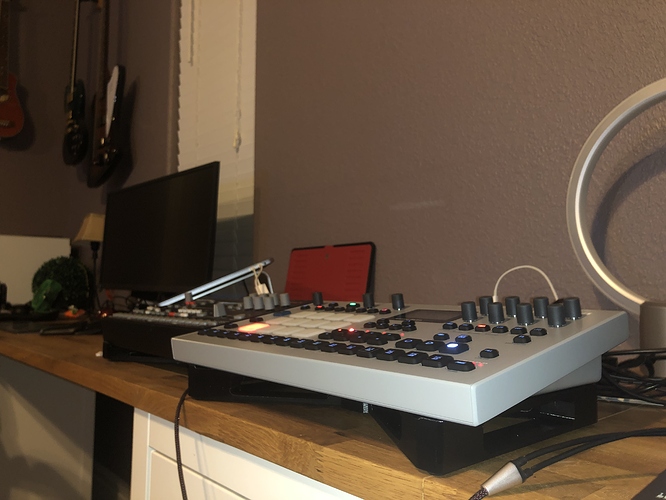 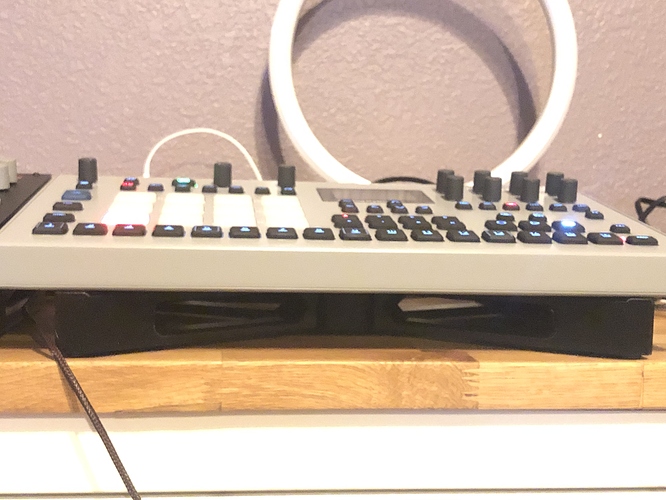 I’m printing what I have designed so I should have a few 10degree sets available shortly. Other designs will come as I have time.

These 10 degree stands are perfect if you like to stand while you make music or want them for performing. Higher angled studio ones will come before too long.

I’m also mulling over ways to make an adjustable angled stand but it’ll take some time before I get around to those.

I’m dying for time to make music too but it’s hard with a toddler and a 2 week old. Designing and printing stands can be done in spurts. Music making takes at least a small amount of uninterrupted time.