What else are slices good for?
You can have 64 different drum sounds in one sample, taking up one sample slot. On one track. Think about that for a moment.
Then with parameter locks, LFOs and scenes you can create entire phrases, but you have only used one track, one sample slot. Add conditional trigs and sample locks and boom, even more possibilites.

You can have 64 different drum sounds in one sample, taking up one sample slot. On one track.

Or sample a mono synth. 2 octaves, three octaves, more octaves.
I like to sample fm synths for playback in my OT.

Sample some kitchen percussion, osc waveforms…
For drum samples it’s great to have different velocities/with/without accent, different amp decays, different filters in a chain or just a whole drum kit.
You can set LEN on Playback Page to either length of the slice or number of slices played.
Or go crazy with loop points^^

Yes! Endless possibilities. Spoken word sample libraries all on one sample slot. Foley, sound effects, what ever you want.

Any way to make a triangle LFO unipolar? I was recently introduced to this concept in vcv rack. Basically if a parameter is set to 0, by default a triangle LFO sweeps from, say, -10 to +10. But I want it to just sweep up to 10. I do NOT want to use a saw shape though, as I want smooth sweeping. This would be very nice for filter modulation as I often want the filter to just open past the cutoff.

Nextly, I imagine this is possible in LFO designer? But I’ve never played with that. One time I did play with it and I realized that I didn’t even know how to assign the LFO! Where is this function?

Any way to make a triangle LFO unipolar?

… I imagine this is possible in LFO designer?

I didn’t even know how to assign the LFO! Where is this function?

In the LFO SETUP page, you choose the destination using PMTR and the waveform using WAVE. The available waveforms are the preset waveforms and the designer waveforms.

Yes. I’ll add lfo designer are named as their relative track (T1-T8).
To do it quicky with designer you can hold several trigs. 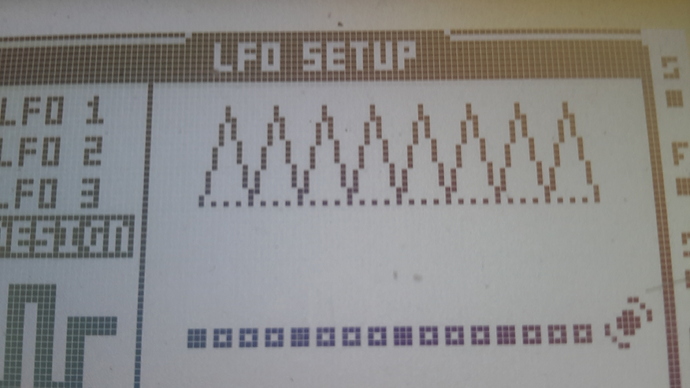 You can even do sines with the lfo designer.
No LFO Sin Wav?

Anyone use the arranger much ?
I’ve been learning the arranger today,
I like how you can sequence mutes of the same pattern on and off.
But found it too taxing on my brain to use, trying to go back and fourth and midi as well…

Also Not sure why the rows start on 0 and not 1
Music is normally made in 8 - 16 - 32 etc just another thing to think about it.
You could leave 0 blank but then doesn’t jump to the start of actual arrangement when goes back to the start.

You can try JUMP.

Can you or anyone else explain the Seq Start/Restart, function? Is that global or per track? And that can be done with just a note?

Either way, I’m going to have some fun setting up patches on the Nord Mod G2 sequenced by the OT and retriggered by the Nord Mod…

Also, does anyone have a resource for using single-cycle waveforms? Every time I do it I just end up with weird buzzy noise, not at all like some of the examples I see online, and I’m just not sure what I’m doing wrong. I have a few sample packs and chains, but it never seems to come out right.

Can you or anyone else explain the Seq Start/Restart , function? Is that global or per track? And that can be done with just a note?

Global, it can be done with regular Transport midi message Start, or a Control Change with CC59 with 34 or 35 values (CC59 mimic notes with values corresponding to note numbers).

Plays free tracks can be independent from the sequencer, controlled by notes or CC59. 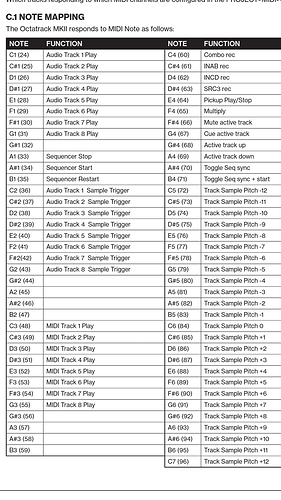 Also, does anyone have a resource for using single-cycle waveforms ?

You can read and ask here…

I’m using some SCW’s with OT but for some reason the most desirable note is already the lowest C out of the 2 octaves available. I know that to be a C, the waveform has to be a specific number of samples long. Is that relevant here and is there anything I can do to have the same note shifted up an octave so it is more playable? Also, is OT’s BPM calculation relevant? it just seems to default to 120 in the settings but doesn’t actually show a BPM for the sample. Any help appreciated! :slight_…

Anyone use the arranger much ?

I do.
There’s two reasons for me; tracker-like sequencing and structure for (multitrack) recording.
I used to record just the stereo outs of my boxes (sequencing everything from OT + AK playing its patterns. No midi clock sync from my DAW), created a structure basically jamming around and then pressed record.
I did some pretty cool tracks like this, well If I managed to do well in one take.
That’s the problem; overdubbing/replacing short sections in the arrangement can become tedious. What was the filter cutoff set to on my Shruthi after the transitions to E07?
Scenes? Performance Makros?
I had my notes on paper and I used markers in the daw for pattern changes, but sometimes it was pretty tedious.

With the Arranger, I can focus more on details + a basic structure for my tracks is set.
Scenes selection is basically automated by the Arranger, as well.
I’ll also use Halt commands to stop the Arranger at certain points and I have text notes that pop up for transitions.
This way I can record the intro, without looking at my notes for scenes, transitions, fills and stuff like that, then move to the next section.
I practise and record one section at a time.
Some tracks only use OT+AK. Some have OT, AK, Shruthi, Micromonsta, Monotribe, plugins, everything sequenced from OT.
If I want, I can do proper multitracking as well.

Want to change that little transition there or that pattern there?
No problem, jump into the Arranger and record again. Nice.

But Arranger is also really great as a Tracker-like sequencer.
With row jump, pattern offset, mutes, transpose, BPM, scene automation (I have the crossfader at Scene B and use scene selection to automate scenes. Scene A01 is blank).
This way scenes can also be used to automate lfos. So quite a lot of possibilities…

I would have to look it up, but this is possibly from another thread that you were asking questions on. I told you how i use the OT, and most of my workflow is with slices. Most of my oneshot and loop samples are made into “samplechains” in OctaEdit. I’ve been loading these samplechains into a static slot…So, I have 20-30 different samplechains to work from. Some Drum sounds, BD, Tom, Hihat, ect… Some synth one shots, even a few chains of loops (need to do more of those when I get a couple days off). Once I load a sample chain into a static slot, I go to slice mode (if you’ve used chromatic mode, it’s just a few clicks down from that), hit record/play and start jamming out my slices… When I get a good groove going with a couple static slice tracks, I go back to the pattern in step edit mode and start sample p-locking the open steps to whatever samples/slices I want to…I could sample lock to any of the 20-30 samplechains…It’s super powerful. Very, very, very FUN.

think you have to know the Octatrack pretty well to work with the arranger,
Found it hard with the small screen and not much info to see at one time.
Still a cool feature to have to create a track without a daw
Will give it another go though once I’ve had the ot a bit longer or my head might explode

Yep. Step by step is safer. If you have a particular goal, no problem. If you want to know OT by heart, take your time.

If you want to know OT by heart

Ha, not really impossible - where there’s a Will…

Guys, I have a weird thing happening. I have a 64 step minmoog line sample, playes fine in AED but when I trigger it it wobbles a little, inconstantly. I’ve tried different tracks, did the old turn it off turn it on again and it’s still doing it. Thoughts?

Is time stretch on?

It was!! that was the problem!