I have some old tapes of acid house and techno I made when just starting out in the late 80’s, back then all I had was a Roland TB-303, TR-606, MC-202, SH-101, Yamaha VSS-200 sampler, WEM copicat, EH electric mistress deluxe, Korg Poly 800, and a Amstrad Studio 100 cassette 4 track. I was quite productive with that little setup, and it remains a very fondly remembered time for me.

The Amstrad wasn’t the best 4 track to say the least, but still it got the job done. Anyway I’m quite fond of the tapes and some of the tracks, I am concerned that they probably won’t last very much longer, so I recorded them to digital to preserve them.

I also decided to collaborate with my younger self, I was new to making music and could have done with a mentor back then, so I thought I’d remix some of them using the Octatrack. The remixes will range from cutting out the crap bits and a general clean and polish (as much as is possible given the scope of the project) to reworking them and adding new parts.

So the tempo of the tracks fluctuates a bit as expected, caused by a combination of TR-606 analog clock master, recorder motor speed fluctuations, and stretched tape, so bpm is not precise - OT to the rescue!

I decided to sample sections then slice them, so far I have only started on the first track, the biggest undertaking of the lot, 40 sections mostly of 4 bars, although there are a few shorter ones and a long section too. So for the 4 bar sections I painstakingly sliced them all up, into 16, mainly because they are 4/4 and it means that I can tidy up the timing without losing too much feel. I averaged the tempo of the clips and set the project tempo accordingly, not using timestretch as it does not sound good enough on the material.

I have never used the Octatrack in this capacity before, so it has been a good exercise in how to approach the various challenges and logistics as well as something to get my teeth into, so to speak.

So far I have been enjoying the process, and it has been a lot of fun revisiting these 31 year old recordings, I intend to compile them into an album, make some artwork and get some cassettes made when finished. 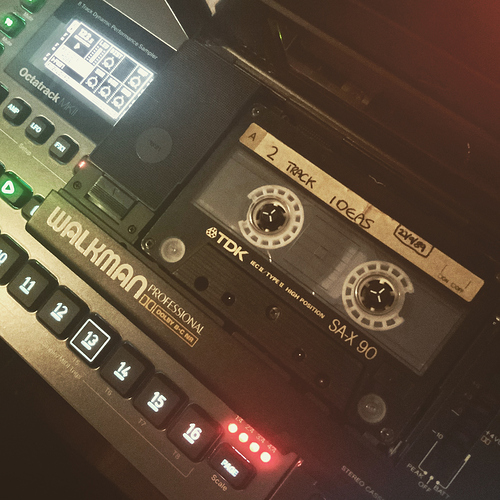 always a great feeling listening to a track you’ve done in the past and forgotten about, not knowing exactly whats coming up…

Yes! A lot of them I had long forgotten about, some I didn’t even remember making, I used to have tons of tapes but only a few left from those really early days.

I prefer the stuff on them to things I did later, I stupidly sold all the analog gear, for a few years I was using crap romplers and came to my senses in the early 90’s and got some analog back.

Well, compared to now, no reverb or midi etc.

nice! looking forward to hearing some of these!

Did you slice these up on the Octatrack itself? How was that?

Wow! Great idea and surely some “nostalgia goodness” inside…tried a similar project with reworking some old beats (in a DAW though), but stopped it soon because it was quite tedious. Maybe your idea of “just rearranging” on a different device is more productive

Did you slice these up on the Octatrack itself? How was that?

I recorded all of the tracks into my laptop first, then on this track that I am working on I cut the bits out that I could use into sections, then loaded those into flex slots, then I sliced them in Octatrack AED.

I did try loading the whole track into a static first, but it was too difficult to navigate the waveform due to the screen refresh rate, and scrolling and zooming was a bit tedious on such a large file, also the AED options are more limited for statics so no ability to find a section then cut and save selection. I could have used a record buffer to grab sections but it would have been even more time consuming. So I decided to work with smaller sections pre cut in flex slots.

Slicing them up was pretty easy and efficient, I just set slice grid then manually edited the slice points, the one annoyance I discovered when working on a large number of files was that horizontal zoom level isn’t retained between slices or files, so for every slice I had to zoom manually, for 30 points on 40 files

Vertical zoom is retained oddly, I sent in a feature request to request horizontal zoom level is retained.

It was quite a good experience to figure out how to best approach the various problems, I tried a few methods and think I found the most efficient way to get it all working.

Most of the others will be much simpler to do as I will be using less audio as they are much shorter tracks and have less parts that I can use. Plus doing the most challenging first set me up for the workflow.

Hey hey. Not to commit a cardinal sin here, by professing heresy, but in Logic 10.4, they introduced “smart tempo” that will analyze the audio tracks, and create a BPM map automatically- a task the used to involve manually tagging the downbeat transient spikes by eye… Well, if you wanted to save time, and only remix (and not edit) the music, this isn’t a bad option. Click Reanalyze Track Tempo- then Apply Track Tempo to Project tempo (to Bars and Beats). From there, you’ll see the tempo map magically drawn in the BPM area… using the newest Flex engine stuff behind the scenes, you’re free to select all the BPM changes and delete them, leaving only a single BPM marker, that you are free to drag up or down to the BPM you like. It seems like a cheap cop-out, but it is amazing.

Hey no worries, unfortunately though I don’t have Logic or any DAW, I didn’t mind doing it the “hard way” though because on this occasion the background noise floor is quite high. I think a slicing algorithm might have a hard time distinguishing between actual transients and the noise, maybe?

I did think about trying to get rid of the noise but I think unless I used some sophisticated software it might affect the overall sound too much, and besides I think it is part of the charm given the nature of the project. I still want it to sound as good as I can get it but my expectations are realistic

Thank you for the suggestion and input though

What a great project . Sign me up for a cassette or DL - cash waiting

@dobermate thank you I will check it out

No midi sequencing, a total of 7 drum sounds, no non volatile sequencer memory aside from 606, 303 and 1 memory in the 101, if you had batteries in them

So a fairly limited setup to what I had later or today, 3 monophonic synths, 1 poly, drums from 606 and a couple of seconds sampling from VSS, and 2 fx. Still it was a fun setup for sure!

Would love to hear the original recordings as well, rough sound quality or not! Sounds like a fun setup

Here are some snippets of some of the original tracks