Nonstandard release formats - what have you done?

I’m somewhere between halfway and 2/3 of the way finished with my next album-ish thing. My style and sound have both evolved a bit over the last year and I don’t really want to just do a standard digital release - I want to do something a bit more interesting. My current thought is a collection of 3 smaller EPs released as one overall package, each focusing on a specific style/mood. I also want to do a physical release of some kind. I’ve been bouncing around different ideas.

1: Tape. Classic, compact, kind of cheap. I’d need to decide on whether I was doing 3 individual tapes or just one tape, though - it could get expensive fast to do 3 runs since none of them will be particularly large.

2: Thumb drive/ usb stick. This is the one I most want to do but also the one I have less info about/ feel least sure of. A few artists I follow have done this. I love the idea. The big downsides are that a) most people rightfully probably don’t trust a usb stick they got from someone they don’t know, and b) it could also get costly. Related, I know Master Boot Record released a floppy, and I’ve seen laserdiscs before, but I don’t even know how to begin and I have no attachment/ nostalgia for those formats so couldn’t really justify the expense.

3: Vinyl. Cool as hell, but very expensive comparatively and I likely wouldn’t even break even (not to mention having to store them until they’re bought could be annoying).

4: A long-ass album meant to be shuffled/ reordered. Cool, but if someone sees a 20-track album it could come off pretentious or just be a daunting commitment that turns them off (and it isn’t like I have a large audience). This also makes a physical release more or less impossible because of the cost. I could do a double CD album, but I hate CDs.

So, this brings me to my question - what do you all think? Are my ideas completely whack and should I just stick to the tried-and-true? Any other cool formats you’ve seen? Do you just stick to digital due to the cost of having media pressed? This is very much going to be a labor of love. I’ve always wanted to have my music in a physical format.

Hey!
Do a mix of all tracks, and if they do not fit do ambient texture between to fade between.
Just n idea!

I’ve always wanted to have my music in a physical format.

Then do that, no matter the cost / potential profits. But forget about USB sticks. No one cares about something so disposable. Go with tape and/or vinyl.

oh, and yes, vinyl and a good artwork for the sleeve.

The only interest i’ve got in flash drives would be novel design, the NIN soundtrack for The Girl With The Dragon Tattoo shaped like a razor blade seemed fun.

Custom fabricated is $$$ though.

Vinyl seems to be quite standard these days again. Nevertheless this also can be the answer.

I wouldn’t dismiss cd’s even if you hate them. For promotional purposes, you can press cd’s for cheap ( very cheap if you go for a simple “single” type of packaging )and sell them at a lower cost

Also, it may be a good idea to sell tee shirts + download codes

Then do that, no matter the cost / potential profits. But forget about USB sticks. No one cares about something so disposable. Go with tape and/or vinyl.

The only interest i’ve got in flash drives would be novel design, the NIN soundtrack for The Girl With The Dragon Tattoo shaped like a razor blade seemed fun.

Custom fabricated is $$$ though.

Yeah, if I did USB sticks I’d likely do custom fabrication or have something 3d-printed to slot them into. The Girl With the Dragon Tattoo soundtrack one was gorgeous. Probably not in my price range to do something quite that cool though. Noted on people not generally liking things like that - I suspected as much.

I wouldn’t dismiss cd’s even if you hate them. For promotional purposes, you can press cd’s for cheap ( very cheap if you go for a simple “single” type of packaging )and sell them at a lower cost

This is a fair point, and something I overlooked. CDs are certainly easiest, and I may end up doing just that because it’s so cheap. T-shirts +download codes is something I hadn’t actually considered - that would be pretty dope, actually. A friend recently did just this. I remember the shirts being shockingly expensive, though - at least for decent ones.

Do you have connections to any local music shop that could sell for you on commission?

Would the music you make be a good fit for vinyl?

I actually might, now that you mention it. There’s a shop near my apartment that sells all kinds of local music. Most of it doesn’t move too quickly, but honestly just having it out there is enough - I know that I’m unlikely to even break even on a physical pressing regardless of format.

As to whether my music is a good fit for vinyl, I suspect so - my last album absolutely would be, I just didn’t have the money at the time to press it. I honestly want to do it just so I can have the artwork on my wall, the friend who did the cover did an exceptional job. The current project… might or might not, I’ll have to evaluate that when I get closer to having the tracklist finalized. As cool as the format is, the music comes first and the format has to fit the music.

honestly just having it out there is enough - I know that I’m unlikely to even break even on a physical pressing regardless of format.

I’m working on that myself, the intentionality and bounds of where I end and can send something out into the world is what i need.

I’ve always liked the idea of making tapes or CDs and then distributing them sort of gorilla marketing style - like slipping them into thrift stores or antique malls or taped to the back of benches or on the counter of public restrooms or folded into clothes at a department store, or under a tree in a cemetery. You could even post locations with cryptic messages on Craigslist or whatever. I imagine it would be thrilling to discover for certain types of people. Definitely not getting paid tho. But it certainly would be “non-standard”

limited runs of tapes seem to be pretty commonplace. less pressure than vinyl. friends of friends have boxes of their own records at their homes because they overestimated how many would sell. this might not be a problem if you have a big enough audience, but it doesn’t hurt to test the water out in the shallow end before diving in completely.
the t-shirt/download code is a cool idea

Seems to be enjoying a bit of a revival for physical releases, bit pricey mind. 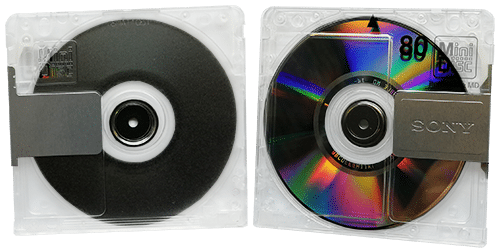 Custom MiniDisc printing and recording in slip cases with inserts for orders of just ten or more, with worldwide delivery available.

I’ve released on some private bittorrent trackers and IPFS gateways.

Kind of fun, and some people actually listen to it, but terrible for making money

i have strange sentiments for quadraphonic sound (which happened to be a commercial failure). maybe someday i’ll do some proper quadraphonic mixes.

Oh man I had completely forgot about these. I still have an old microcassette recorder somewhere.

Geurilla marketing like this sounds brilliant. I don’t so much care about getting paid - I just want it to be out there, preferably listened to.