Hiya! I’m new to the Octatrack World, and have set up our machine but have a question about why it seems to be automating playback and record on certain tracks?? Can’t find anything specific in the manual so thought I’d swing it to you folks.

I have set up 3 Thru tracks (T1, T2, T5) which are running live feeds from a keyboard, drum machine and synthesiser (all working in real time and looping live). Then I have 3 Flex tracks which are set up to record from the 3 Thru tracks, so it’s in these tracks that I make my loops from.

My question is, why does it appear that there is some kind of automated record happening when I press [PLAY] ?

Here’s what’s happening from all tracks on [STOP] - all tracks have the square next to them: 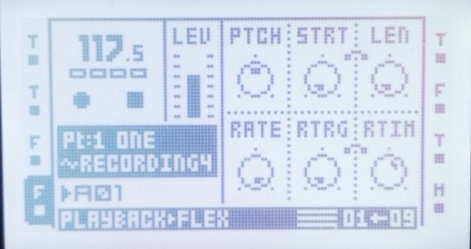 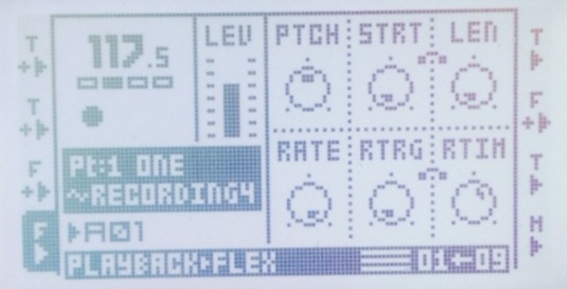 Then after the machine has run a lap through the 32 step sequence, it goes to this: 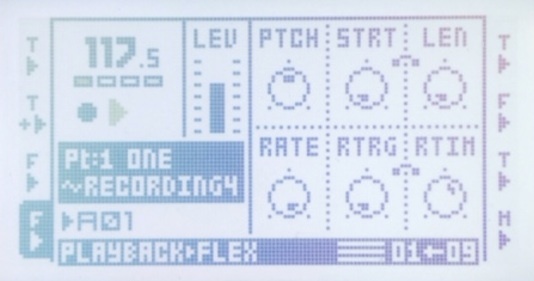 T2 stays stuck on the +> for ever. Which means it is constantly recording and looping over itself right? It’s just a thru track so it doesn’t affect the stuff I’m recording, but I have no idea how I made it automate to this and would like to know how to undo it.

Answers any one??
Thanks in advance for your wisdom.

I’m guessing tracks 1, 3 and six have a one-shot rec trig and track 2 has a normal rec trig. Look them up in the manual.

What you said about recorders was a bit confused. There are eight recorders and their contents can be played back on any track(s), they’re not limited in any way by the track on which they seem to record.

Heyo, first off, unless you’re wanting to resample the FX on the THRU tracks then there’s not much point in using 3 THRU tracks recorded by 3 FLEX tracks - easier approach is to turn up the inputs via the mixer (sacrifices no tracks) and then just use your 3 FLEX tracks to sample directly from the inputs. Once your sound is recorded, turn it down at the mixer again (or not). (sorry for this paragraph if indeed you are doing this to resample the FX on those thrus

Second, to figure out what’s happening with the + signs you need to know the two ways of sampling on the OT. + means that track is CURRENTLY recording btw, not just record ready or whatever. The buffer belonging to that track (RECORDING1, 2, 3 whatever) is currently being overwritten.

Method 1 is manual sampling: hold a track button and hit the input button (recAB, recCD or MIDI for internal resampling), and it will then record to that track buffer based on the recording settings in that track (fn + recAB/recCD)

Method 2 is probably the one that’s messing with your current project, it’s automated recording using the recording trigs. You can lay down these trigs while inside either of the two recording menus. So imagine you drop a standard recording trig on the first step of the sequence: every time the playhead passes that trig, the track starts recording. So it’s constantly sampling, and constantly overwriting old content. Looks like this is happening on your T2. If you hold fn and hit that trig again, it turns orange, meaning it’s a one shot recording trig, meaning that it only starts recording the first time the playhead crosses that trig, and ignores it on any subsequent passes. It records for as long as you’ve specified in the rec options. This is happening on your T1 and T3. You can rearm this trig at any point by hitting (yes) when outside any other menu, and it’ll say ARM REC.

This stuff about recording methods is all in the manual, but I felt like writing it out anyway since it’s written a bit obtusely and took me a good while to figure out that you could drop rec trigs while in the rec menu. Any more questions just ask…

This, along with some serious google searching and manual deciphering (not to mention staying up until this ungodly hour working out what the fuck this octatrack is actually capable of and how to humanly understand it’s seriously crazy lexicon) has helped me at least get to a point where I feel like things are going forward 2 steps for every 3 steps backward.

The THRU track tip helped a lot (ie. actually don’t need it at all for what we want to do…). Thanks for that.

And a bit of internet searching helped me learn more about these strange little beasts TRIGS - recorder AND playback. And it seems that the + and > signs are related to these record setting… somehow. Still figuring it out. Probably need to stay awake for the next three days now to fully get inside the OT brain.

I have the same Problem.
I believe this is one issue of OT.

Hi. No issue above. What’s your problem? Do you have rec trigs in RECORDING SETUP page?

THX after spend DAYS with searching and experiment - problem is fixed.