I didn’t see this coming! 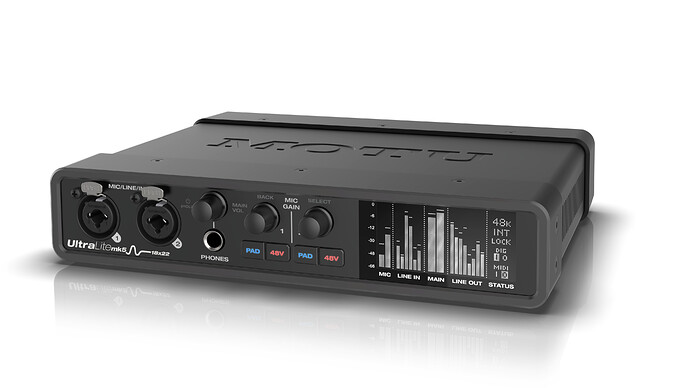 i wonder what the latency is like? Big Sur did away with being able to install drivers at the kernel level which de-prioritizes them. there is a current work around that requires some hoops for the user to jump through… otherwise drivers are installed in the ‘user space’ which has a lower priority for audio processes.

apple is doing this in the name of security apparently. hopefully they’ll sort this out as big sur develops and new audio drivers are written etc.

Optimized drivers for both Mac and PC deliver ultra-low latency performance. With a high-performance DAW such as Digital Performer, the UltraLite-mk5 delivers an astonishing round trip latency (RTL) of 2.4 ms (milliseconds) over USB (at 96 kHz with a 32-sample host buffer).

I didn’t see this coming!

^^^ maybe this in the pipeline was why she had a hard time finding a mk4?

Might be time to upgrade from my MK3, due to it’s buggy nature. Let the research commence!

the UltraLite-mk5 delivers an astonishing round trip latency (RTL) of 2.4 ms (milliseconds) over USB (at 96 kHz with a 32-sample host buffer).

And this is 0.57ms more than the MK4 can do under the same circumstances. I imagine the difference has a bit to do with the new loopback capabilities.

Love my Babyface Pro but often wish I had more I/O and expanding with ADAT hasn’t seemed ideal, but this looks pretty great and USB-C is very appealing when that’s all my Macbook Pro has.

I’m guessing the converters aren’t quite RME quality but will my tinnitus-ridden ears even notice?

Same, I love the form factor but my MK3 drives me up the wall! It looks like Headphone and Mains have separate volume controls which is huge for me, let’s hope they’re pots and not those awful encoders

I’m also wondering how the converters from the Motu MK3 will compare to the MK5. Will there be any quality improvement? The software looks much better too.

@taxhaven yeah, restarting my laptop and power cycling the Motu is commonplace to have it be detected properly. It’s annoying to say the least.

The digital clock is a big improvement between my traveler and my MK4. Less smearing in the high end when I clock the traveler to the MK4. It’s subtle, but there.

When I purchased my MK4 with the Sabre32 DAC, it sounded as good as my Apogee Duet 2. I don’t see why the MK5 wouldn’t be level with RME.

For weeks and weeks I have been checking every night to see if any mk4s were available and finally concluded the other day they were either going to do a redesign because of the fire at the semiconductor manufacturing plant or because the mk4 was released in 2016 (or both).

What do I win?

Seriously though, thanks for posting. Time to start taking pics and posting stuff for sale! (And talking to the old ball and chain lulz).

Hope this might bring MK4 prices down… I have an MK3 but always wanted to update, but it’s too steep of a difference in price for me (I live in Argentina where prices are much higher to start with).
I like that the MK4 is compatible with my iPad, and that it allows (afaik) for a simple way to route internal computer sounds (ie. Browser, etc) to the headphone bus, which I was never able to do on my MK3.

talking to the old ball and chain lulz

Let us know if we need to put in some good words! Good luck - I hope you get one. It was starting to sound like this is the device you were looking for. At some point down the road, I might need an interface with more inputs, and this one would definitely be on the list to check out.

You are kind! He is usually pretty understanding, but an mk5 would be pretty spendy. I should have enough if I sell neglected devices (dang kids) and play the birthday card.

Oh, and maybe bat my eyelashes and put something nicer than jeans and a t-shirt on. LOL.

The mk5 is definitely the one for me. Between this announcement and being on the verge of having dedicated music space (a 30” by 40” kitchen table, settle down

) things are looking better and better for actually getting my EP done!

there’s some talk about how going forward the drivers will be different due to apple MacOS requirements.

this thread at gearspace has some info… a bit of “the sky is falling” coupled with “calm down” but there’s some good info about driver issues in Big Sur.

Starting with big sur -apple closed access to the kernel for driver developers, new drivers can...

basically, some people are saying the low latency audio drivers require access to the core (kernel level) and the new “user space” is not part of that and is a low priority location for stuff to happen… and audio is a high priority process.

I like the new display. MOTU wasn’t going to be left out when they saw everyone doing black editions of synths this past year.