Just because these moments make me feel good, and i felt like sharing. I know many people shy away from pictures of their loved ones but we have no cats. 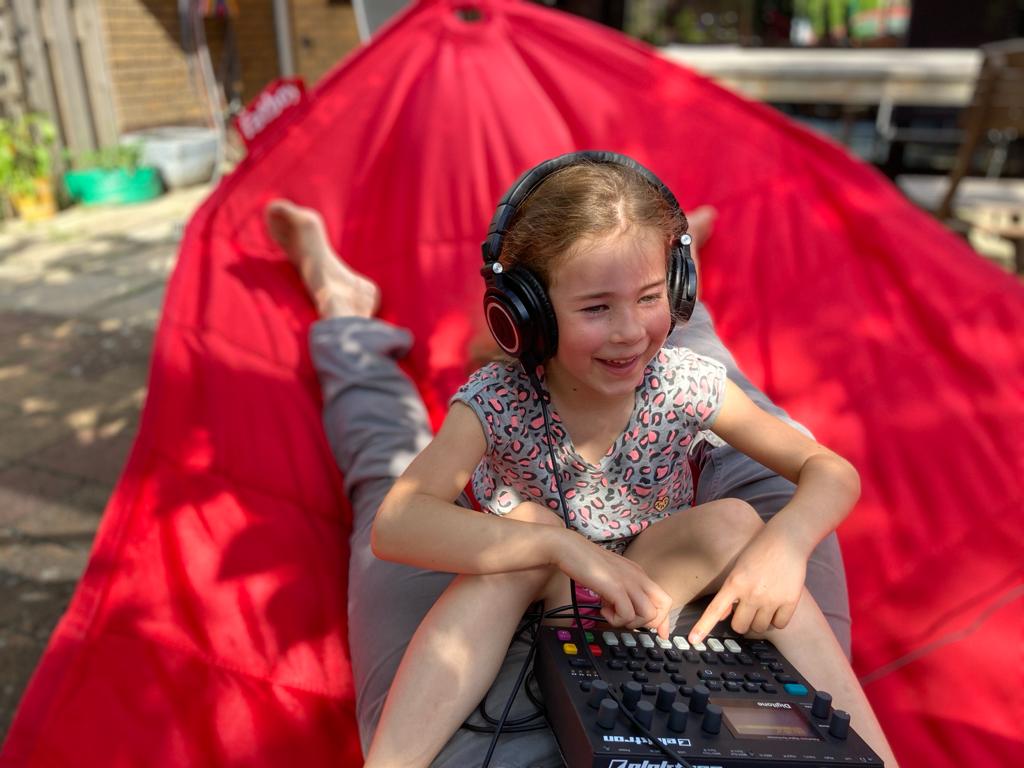 Same. No cats, three kids. They jam with my Machinedrum and make farty sounds with the OB-6 once in a while.

This is super sweet. Thanks for sharing!

I tried to start a loosely related thread yesterday.

This morning my 5 year old boy was looking out his bedroom window and he said “Daddy I can see a Policman being unstable with an Ant” This little chap comes out with some corkers. I’m attempting to catalogue them going forward. 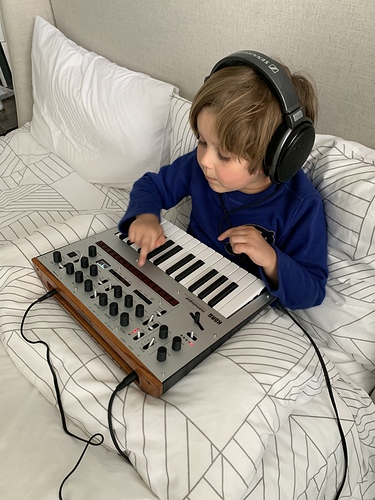 At what age did you folks feel comfortable letting your kids play with your gear? My son is 3 and I wouldn’t let him anywhere near my stuff right now. Every once in a while, I think about the blipblox or some other kid-oriented piece, but haven’t gotten anything yet. I’m afraid he’ll either bash it to pieces or lose interest in a week. One day, maybe, or maybe there’s hope with my daughter (1 year old). hah

My Son’s 5 & a half & i’ve let him tinker (supervised) with certain pieces of gear for a few years now. The cheaper things really.

With the Monologue i’m happy to leave him on his own. But he has to wash & dry his hands & promise not to turn the volume up beyond a certain point. Although he usually uses his own kids headphones that have a volume limit, but did comment that my phones sounded much better. He knows the drill though.

Soonish i’m going to show him the Mpc One, as he’s showing interest in sampling things & layering different sounds. He uses garage band a fair amount, so understand the very basics of sequencing & layering instruments. He also raps, sings and plays the drums a little. He’s not necessarily talented per se, but he’s very sensitive to music, has amazing rhythm & understand playing with velocity to create different moods & feeling. In fact on 1 occasion a few years ago he asked me to load a piano sound. He was playing it very slowly & gently & he told me he was writing a sad song about my dad dying (his grandad, that he never met).

He also has a natural rhythm/wrist technique when it comes to Scratching on my turntables. I was a really good scratch/battle dj in my teens. I’ve never taught him but he just has the natural ability. I’m really looking forward to doing that with him properly in a year or so.

He has his own Spotify account & playlists & finds his own music. His reading is phenomenal for his age so he can find whatever he needs to on Spotify.

He often talks about different tracks he’d like to mix together. Always going on about remixes, trap, yodelling (bless him).

i dont have kids but i try to encourage ‘kids/neices/nephew’ etc to have a go, its not as hard as they might think … making weird noises or dj’ing etc…

but i would try to limit the volume/bass/resonance if theyre doing bleep blip fart noises (on the synth, not via other ‘sources’ )

I feel there is no need for ‘special’ gear, just a bit of supervision and do’s and dont’s worked out fine for us. Daughter is 6 now, son turns 4 next wednesday. Both are not super into the gear, the Deluge is a favorite (colors, battery powered, sampling their voices). Other gear starts to get interesting as they allocate moods and characters to the presets. My kids are not the most coarse or clumsy so i have learned to trust them around the gear. Also i think the digitone is built like a tank and can take the handling.

3 and a half, sometimes comes and sits on my lap to bang on the digi-family. Took those photos a while ago and I love how focused she is:) 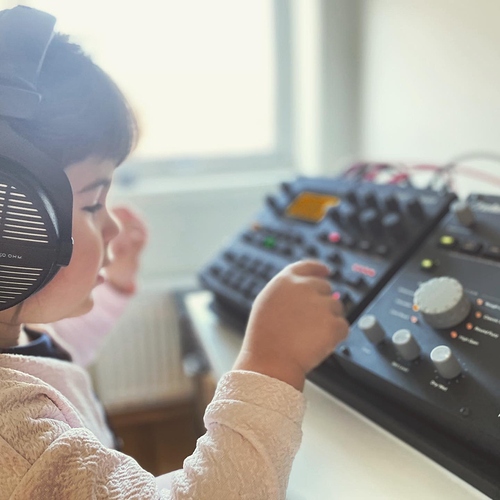 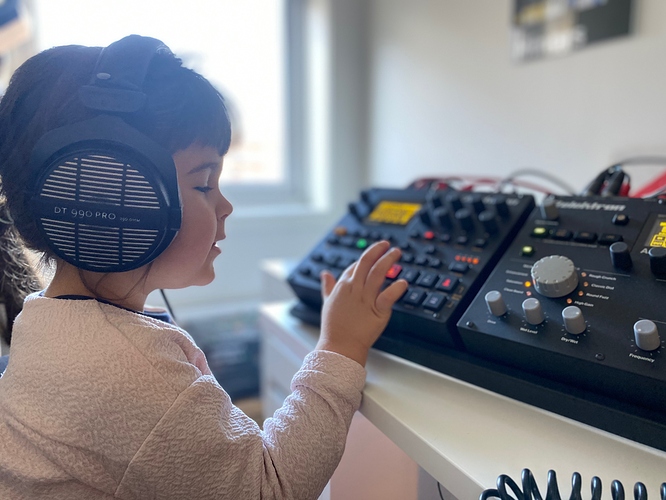 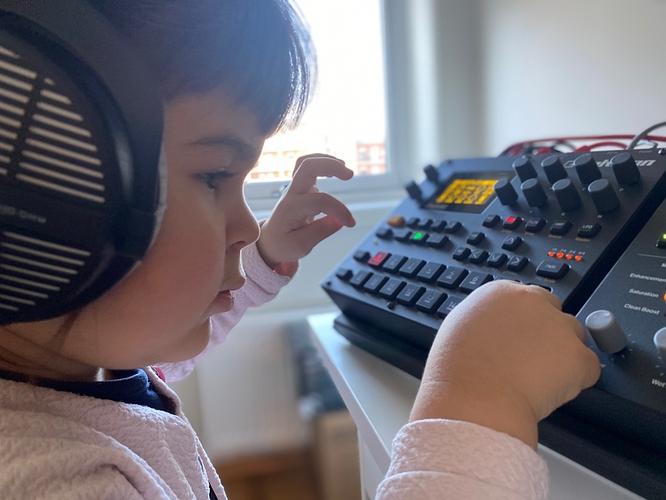 My almost-three year old likes the SH-01A and Volca Bass. My main worry is snapping off a switch or dribbling into the keyboard, but it’s fun watching him explore the sounds he can make. Those two work well due to being hands-on, battery powered, and having built-in speakers. I wouldn’t be so comfortable letting him play with OT, MD or A4, but he wouldn’t enjoy those much anyway.
I also showed him the Korg R3 vocoder and he said “I love you mummy and daddy” in a robot voice

This is from a few years ago. Mini Orbital. 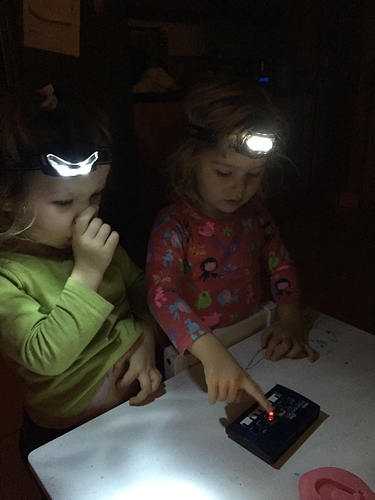 More recent with the Model:Cycles 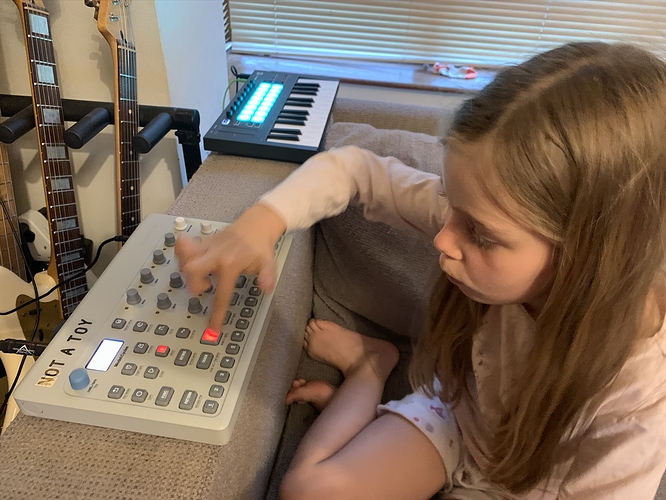 We’ve a load of musical instruments left out in easy reach of our 3 kids. Apart from my synths, and an old keyboard specifically for the kids, there’s 3 guitars, two bass, 2 ukes, a harp, a flute, a few tin whistles, and a big box of things that make noise when you shake them.

I allowed my kids play with my circuit a few years ago, when they were around 5 years old.
Their creations started sounding better then mine; looser, funkier, more avant garde, less contrived
So I put a stop to it.

Our son just turned 4 today, he is used to be around gear and music. After summer we will talk about learning a classical instrument in a friendly setting.

Suzuki method could be an option. 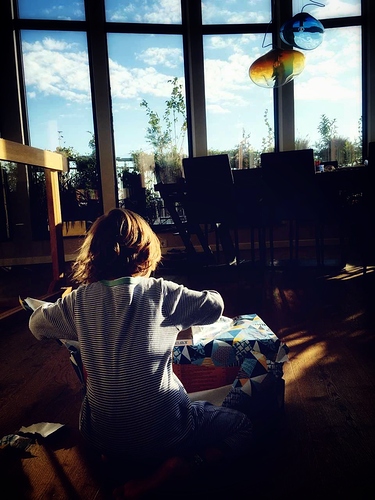 I allowed my kids play with my circuit a few years ago, when they were around 5 years old.
Their creations started sounding better then mine; looser, funkier, more avant garde, less contrived
So I put a stop to it.

My kids absolutely love the OP1 (way more than even the drum kit). 18 month old pulls the nobs off but actually through sheer randomness lays down some weird shit to tape. 4 year old just loves to say stuff into it and play it back.

I don’t worry about them with it too much, for all the toy aesthetics it is pretty sturdy. Used to have a Virus which was built like a tank so didn’t care if they played it. Didn’t like them on the Analog Keys though - press too many buttons and no sound would come out.

His 1st time on the Mpc One.

Have to say I was wincing slightly at his jab jab pokey pokey fingers. 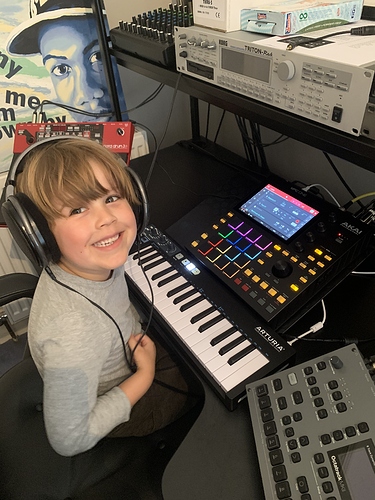