Is the A4 Redundant if you already have other Elektron Gear?

Personally, I’d only really consider the A4 if I was going to use it as 4 independently sequenced monophonic voices.

I use and love it because of this! I don’t have a large collection of synths, and don’t use a DAW or multitrack. So having four tracks of mono (or 2 or 3 if I use sóme occasional duophonic tracks) is perfect for me. Beats buying a different synth for each other part you write

To the OP: I can’t speak about high-high end Analog synths. But as far as I can judge I think that i agree with what most that is said: great to have a dedicated sequencer in every box (at least I love that), A4 not perse meant for polyphony first and foremost, but a great machine especcially if price comes into play. I love mine to death, first synth that made synthesis click with me.

Good luck with the quest!

4 fantastic mono synths in a sweet programmable package that’s a snap to program, each synth a button press away. It’s brilliant.

I was thinking the same thing, the a4 looks so sexy with black finish. Renewed my interest, I have a digitone and a laptop, that’s it. I need a drum machine (dn does drums amazingly) or a sampler, lookin at you polyend tracker.

Something about an a4 though

I just purchased a A4 because I really like the digitone workflow and I couldn’t find a good alternative to the A4 to sequence from the digitone. I wanted an analog self contained box with multiple voices/multitimbrality, patch saving, a reasonable amount of knobs/control. I couldn’t find much else out there to compete.

Thanks for all the help guys! I think what it comes down to is: There is no substitute for a native Elektron sequencer if you enjoy and are used to that workflow.

I was seriously leaning toward the A4 before making this thread simply because there was a “roundness” and “sweetness” to it’s tonality I enjoyed. It’s not as creamy smooth as the Moog Sub 37 demos I’ve heard. It isn’t as impressive for poly pads as the Prophet stuff I’ve heard, nor does it seem to be as aggressive and overdriven as some monosynths I’ve heard… but it still has a very pleasant tonality I’ve taken a strong liking to.

The more I think about it, I think the “sequenced series of monosynths” approach fits my style as I’m mainly a metal guitarist and end up writing riff-based music most of the time. This is what I wrote the first week I had the Digitone (with a touch of a borrowed Minilogue I had doubling the chorus riff) just to give you an idea of the type of music I write:

I’m not even well versed enough in electronic music to tell you what genre it is, but I listen to a lot of Carpenter Brut if that’s any indication? Anyway, I think I’m going to pull the trigger on the A4 (the black one because I’m shallow and it looks sweet) and it’s because of a lot of the comments here, so thanks again for that!

Awesome. I’m sure you’ll get a lot of mileage out of it. Btw, the link to your music didn’t work for me on an iPhone 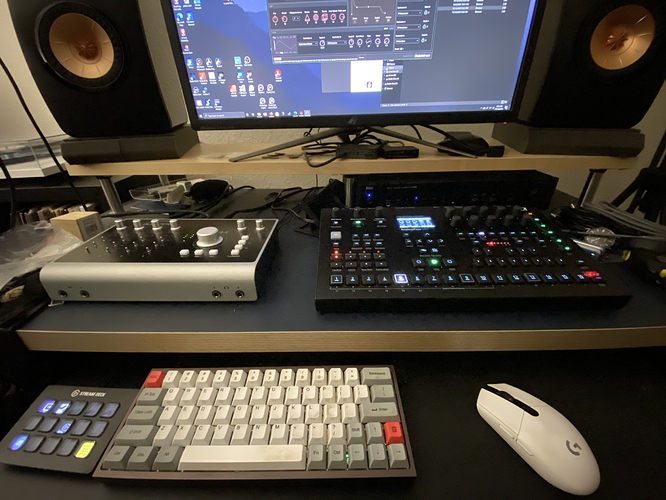 I’ll update once I wrap my head around it. I’m not going to integrate it until I feel I’m comfortable with it and feel I can make whole tracks on it alone.

I feel like the A4 makes a lot of other pieces of gear redundant. So the opposite of what the op posted.

It’s a modulation monster right! Enjoy your new darkside A4

It’s amazing how far you can go with 4 voices. Hit some roadblocks as far as how sounds work from pattern to pattern… didn’t realize they carry over. I went in without reading the manual so that’s the next step. Havn’t figured out the song mode yet so this guy was done the dgitone way with conditional trigs and manual switching of patterns.

I can’t wait to hook up the Digitone Keys to this thing to start controlling it. Despite being a terrible keyboard player, I find it way easier to come up with melodies with more than one octave.

I love how this thing sounds. If I had to choose I’d choose this guy over the digitone for the tone of it alone. I’d give up 4 voices no problem. Although, I don’t have to choose since I have both

Is that all A4? Sounds fantastic!

As a side note, the music to the first level of the Revenge of Shinobi still makes me feel some sort of way to this day (responding to your avatar).

Thanks my dude! Yeah it’s all the A4, no overdubbing or anything, just recorded it from overbridge. I did run it through my DAW after with some comp and EQ, and I don’t think I should have because the transients are too soft and I feel I scooped some body out of the mids. I was just using my default template I use for my Digitone and that was dumb haha.

Speaking of Revenge of Shinobi, that game and Yuzo Koshiro’s other works is what got me into electronic music in general. I’m a metal guitarist but bought a Digitone because it was an FM synth and I wanted to make Genesis music! My handle is the name of the evil crime syndicate in the Shinobi games just in case you didn’t know haha.

Yeah the A4 track you posted definitely sounds like boss music. Super dope!

Actually I take it back, it sounds like final stage music…

The A4 is just so good at making Brut/Pertubator/Terminus sounds. Almost every time I use it I make something crunchy and video game like.

I am so glad I decided to get it…

Me too (I’m glad I got one too). It took a while but once it clicked it’s ridiculous how much sound can be achieved with only 4 voices. I truly believe that an electronic musician (from any of the less hyper produced genres) could hold down entire shows with the A4, and perhaps some 3rd party processing, alone .

I would keep myself in the elektron ecosystem because when you know one device it doesnt take long to grasp a new one. And they prove now they take care of users by usually adding new functions with updates which is a joy over the time…

The analog four is a beast

I truly believe that an electronic musician (from any of the less hyper produced genres) could hold down entire shows with the A4,

That’s my goal with it, I have the Keys version. Not sure how much progress I’m making, but it’s fun to try.

Back on the topic of how “redundant” the A4 might be paired with multiple other Elektron boxes:

As an owner of the Digitakt (my first Elektron), the Digitone (my second), and a couple other synths there have been times that I have questioned the need to hold onto the A4. What has kept me holding on is the value of using the box on its own. I actually picked up an extra power cord for hot swapability and it’s great being able to integrate when needed and fly solo when that’s what’s called for…