Is switching parts smoother on OTmkII?

He’s using Thru machines on part 1, recording to their respective buffers.

Then he switches to part 2 with Flex playback, and there’s not even a hiccup.

I’m on MkI and there’s very obviously some hiccups during part changes.

I created a new project to test before posting here.

The pattern stays the same.

I switch to Part 2 and it’s noticeably louder (with the exact same settings per Part).

Then I switch back to Part 1 and it does some sort of turntable “whoosh” sound.

There is nothing happening with regard to LFO, FX, or anything at all.

I’m waiting for a video to upload now and will post it in a moment.

p.s. not sure why I can’t get Flex track 5 to playback in the new scene, either. You can see it records in Part 1 and does not playback in Part 2. oh my goodness.

Direct part changes can be glitchy. I can try to reproduce but could you give more details on your set up?
What coming in Thru, samples or recordings in Flex ?

Input AB is digitakt on Part 1’s Thru Machine.

Input C is microFreak on Part 1’s Thru Machine.

Recorder trigs are placed on both Thru tracks, T1 and T5, with playback trigs also placed on step 1.

Part 2 is exactly the same except T1 and T5 are Flex machines playing back their respective buffers, which is supposed to play back exactly what the Thru machines were playing. 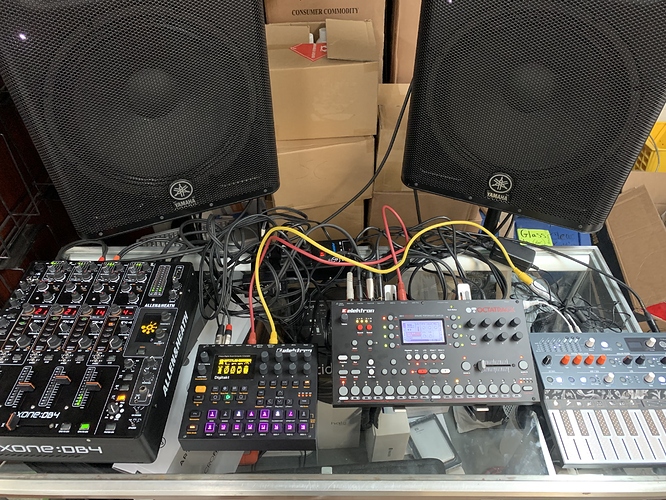 From P1 to P2, it cuts the sound until the Flex is played, and from P2 to P1 it reverses the sound, nice glitch btw !

No level difference with unity settings (+63 for THRU PLAYBACK VOL).

So it looks like I’ll do two identical patterns* and do my switcharoo thatta way.

I wonder how dataline did it so smooth. (As I’ve often wondered)

I wonder how dataline did it so smooth

So fast and precise gestures! Like if it was accelerated and time stretched (not talking about the beginning) ! But the tempo corresponds!

Concerning that transition, what is timing of the video?

This is the same set up in this video as the one I’m taking about but isn’t the same video. If you buy this album it comes with another how-to video. You can see the trick around 1:50. Basically any time he’s hitting the part button and up (or right arrow), he’s doing the trick I’m trying to set up.

I’ll screen record the bit of that video tonight after this gig and hopefully Cenk won’t be upset! …he walks you through his method and I’ll share just that snippet… for educational and trouble shooting purposes

@sezare56
Here’s a chunk of that video. I chopped it up to deliver the gist of what I’m getting at.

so, it seems i just have to have impeccable timing on the switching of parts if I am to go this route.

No level difference with unity settings (+63 for THRU PLAYBACK VOL).

this solved that issue i was having. Thank you.

Did you ask cenk ?

He’s using yes/arm and one shots, so it’s recorded once. I just tested, it behaves the same.
He also uses the crossfader for the transition.
Testing…

Why don’t you keep T1 and T5 as Thru, Record them with CUE, and make a crossfader transition to a Flex a la “transition trick”?

i don’t know. this way just makes sense to my brain and I’m cooking with hot oil now!

it’s still weird that switching parts reverses the samples, but I don’t have that issue now with the separate patterns!

i’ve been lost in la la land all afternoon.

Here’s a chunk of that video

Is this content yours to upload without approval ? If not can you remove the link. The post was flagged, I presume this must be the reason cc @Mods