I can't understand this

hello,i need some help with my octatrack.
On T5 static machine I have imported a loop from computer (over usb). i set the trig and its looping,but i got same replica of loop on T6 but slightly different. I coudn’t get rid of that loop, it kept repeating. i changed scene1 to scene2 and back to scene1, and it stopped. Now for some reason my filter is not working on T5.
sometimes when i sample my machinedrum and switch to scene2 only hear 1/4 of beat not full bar. then i need to clear slot and sample back.
what am i doing wrong? i always stuck in the middle and start a new project.
feels like im getting nowhere.
please help and advice.
thank you

Hard to answer to several different problems without details.
Maybe you can start with a new project again and post here what is the first problem with more details…

today started a new project, imported a 64 chain slices wav, when i try to slice them i got this exception error on screen: 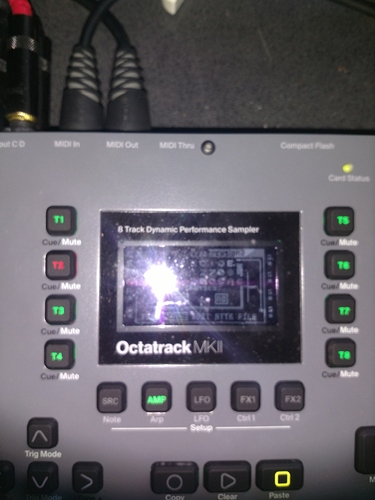 i got this exception error on screen

I recommend that you create a support ticket on Elektron’s website. Elektron will help you to diagnose the problem.

i’m doing that right now… thanks!

i would like to exchange it for rythm mk2

I can understand why some people end up not liking the Octatrack. It is a whole system and way of approaching music that isn’t everyone’s cup of tea. And it is overwhelming what you end up taking on to do certain things and trouble shoot right out of the box.

I’d say start simple and just accept you are going to need to learn with a manual, video tutorial, or other guide to navigate the system. Taking notes of what you do to get things opened, set up, and routed, or just repeat, repeat, and repeat doing it until you know it.

What I can say about this as an “instrument” if you just look at it like that in the sense that the system itself is a part of that approach that you will have to repeatedly practice until you are familiar enough to become comfortable with it.

If you play a guitar you have to work your hand’s and fingers out and put them through repeated strain in order to nail chords and progressions correctly, and if you want to become Cenk or just be able to run a pick up machine and live loop you will have to navigate the set up several times to begin to grasp the approach.

It’s like Garth said in Wayne’s world, “It’s like a new pair of underwear. At first it’s constrictive, but after a while it becomes a part of you.”

However I have used the Digitakt for a year and I would say if you have the desire to take the time it takes to learn the Octatrack up front and accept upfront it is just that. You will have to work to learn it but you can just take it in as you need and not worry about learning everything at once.

Some can pick it up and remember it more quickly, but really it is a way of thinking. Once you accept that it is a learning process and you just break it into chunks, as each capability just takes an assembled number of parts and steps to do it and if you were to set up things on a computer DAW, while the OT certainly has it’s limitations and isn’t a DAW, but it is a program.

Learning the Digitakt took time but it was a smaller system. And just as the description says it is a Drum Computer. If you are familiar with computer programing then this is a visual and key based system, with combo key use. If you are an avid user of say these types of functions in a DAW with your computer keyboard it is just a matter of having the willingness to explore the system.

And instead of typing code in order to get a result your manipulating the controls to either change parameters, page through menu’s, select objects/samples and it takes time to learn any system.

But if you liked using computer based MS DOS like system’s this is a music programming computer with computer like buttons and a dj crossfader and knobs. So once you grasp that conceptualization you’ll begin to see that it really helps you organize your approach and it get’s fun in time. But the Digitakt is more instantly gratifying and I would recommend if your hesitant about the OT then I would wait and just see if you like the Elektron workflow/modular computer-esque approach to creating music and sound.

I was hitting a wall the first night I used the OT just to test it out and I spent 5hrs of my night testing all of the functions I could, scrubbing through video’s, reading the manual, Merlin’s guide, and this forum. It was a total all nighter of studying to get things done and understood.

But if you’ve ever seen the Movie Hackers, grab yourself some caffeine and like a good video game peel through the woods of menu learning to get to Grandma Cenk’s and lay down that first track. And you’ll feel the victory of learning it and getting something accomplished. Only you don’t get a badge, but a new ability!

But I know what it’s capable of and though say the Deluge and a good MPC or ipad could be more approachable to others, if you get the lingo I’m laying down on how it is you should think when you approach the OT or the DT, you will find yourself really enjoying the quick power once you can flex your mind on your approach without having to conscientiously think about how to do it, and in time with repetition it does become a reflex but if you don’t want to put that into it to get their you can get your basic functions and such probably with in a few months and do what your trying to do. But just learn it a little at a time if your aren’t getting somewhere just take a break.