I’m looking to finish my setup with adding the missing piece. Happy with both the M:C and the 0-Coast. But I need something which works as a connection, the center of my setup. Sound wise, I’m missing glitch/clicks/cuts. Portability is important, as well as MIDI (for sequencing external gear). Line-in is definitely a plus (less cables, more options).

OP-Z: just got one (but could still return it). Pretty happy with the workflow. Line-in module allows for adding FX to the 0-Coast. No stem export as far as I know. Build quality is the big question mark. Besides, I’m not sure about TE as a company.

Blackbox: seems pretty interesting, although I’m not a big fan of screens. But I guess it could work well within the described setup. Didn’t find any convincing videos though. Sequencer is probably not as good as DT/OP-Z. Song mode sounds good.

Digitakt: seems the best in terms of sound (for me). Not as portable as the others. Not sure if the BB fits better because of long samples.

Any recommendations? Other ideas?

Qu-bit Data Bender w/ a Strymon A.a. It’s euro rack but you could get a 4MS Pod to house them both:

Harness the Sound of Failure with Data Bender. Data Bender is a circuit bent digital audio buffer. It is inspired by the ways in which audio equipment can fail. The sounds of skipping CDs, software bugs, and defective tape machine playback are all...

AA.1 is purpose built to combine your guitar gear, effects pedals, and Eurorack modules in just about any way you can imagine. 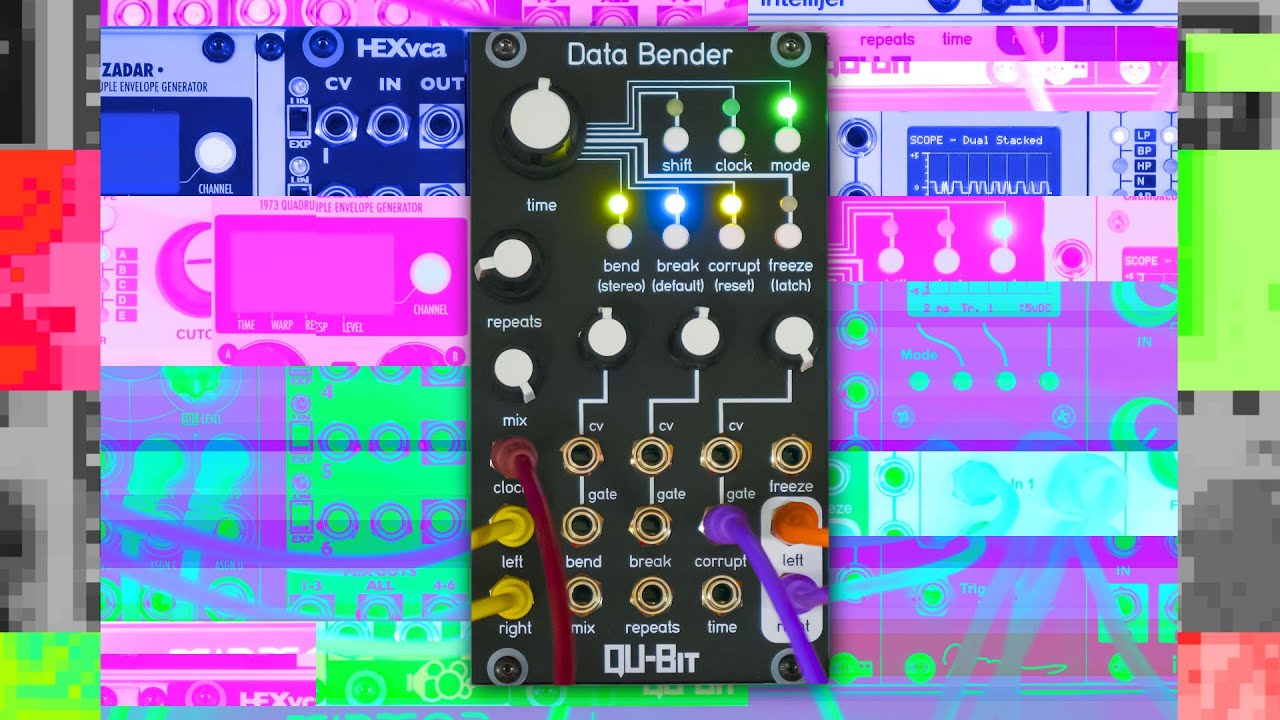 But I need something which works as a connection, the center of my setup.

Understood. I was wondering a bit about the reply. Nevertheless, interesting stuff.

I think DT does indeed sound the best out of all your options. For clicks/cuts/glitches, it does the job very well, especially with lots of bit reduction. Samples can be up to 33 seconds which is fine for the above. Then, when it comes time to add 0-Coast, you could sequence it via midi from the DT and use the inputs to add delay/reverb, then send everything through the master compressor. This can all be recorded to a DAW with individual stems (sans FX) for further processing using Overbridge.

Thanks! Overbridge is definitely a plus as well.

I would go the Digitakt route. It’s true that it’s not as portable as an OP-Z, but DT is faster to work with.

OP-Z can be used as a center hub and what’s interesting is that with the OP-Lab module you can go beyond midi connections and use CV outputs to modulate additional parameters. Despite this capability, I don’t often use it, but it can be done (and there’s no such thing as having too many modulation sources with modular).

The bigger issue here is that despite OP-Z being able to sample, if Digitakt is a choice, I would choose Digitakt because of the screen. It’ll be easier to work with recorded samples on DT than OP-Z (in my opinion and experience). If OP-Z is your device, you’ll just get used to the workflow (but DT is easier/faster).

BlackBox is great depending on what you want to get from it. Reading the BlackBlox thread here, the biggest fans of this device use it for multi-samples and granular processing. It of course does loops too, recording and the onboard effects are definitely not bad, but it’s short on features when comparing to OP-Z. It excels over OP-Z with access to the screen but if the sequencer matters then I wouldn’t go for a BlackBox first.

Right now I can say that I’m enjoying using Digitakt with midi sent to 0-Coast. I’m using BlackBox to record 0-Coast but I plan on eliminating BlackBox with sampling loops back into Digitakt. I’m very likely going to phase out BlackBox, or start looking to use it more for granular processing (maybe).

OP-Z’s biggest edge in this comparison is the size and onboard battery making it the most portable. You still need the external battery with BB and DT.

Thanks for the detailed summary, that’s very helpful.

My idea with the BB is to sample both 0-Coast and M:C and build songs based on these samples (with additional samples from the BB). I think that’s hard to achieve with both the DT and the OP-Z. With these devices, sequencing external gear is better. So it probably comes down to sequencing (DT) vs sampling (BB). Would you agree with that?

That’s tough to answer because it depends on how you want to use those samples.

If you plan on recording loops to each pad, the BB can hold 16, but DT can hold 8 per pattern and there are 16 patterns.
If you plan on triggering slices at transients, it’s easier on BB (DT requires manual slicing/saving).
DT has sample locking which greatly expands flexibility but if you’re working from recorded samples and no transient detection, DT requires more initial setup.

I would watch as many videos as possible if I were you. BB is going to be more immediate out of the box and watching the tutorials will be quick work. It’ll just come down to if you want the other features DT can provide or even performance controls of OP-Z.

There is no overall best really. Different uses and different features.

Also, does stereo vs mono sampling matter? Of those 3 machines, I believe only BB will sample in stereo. 0-Coast is mono so not a big deal there, but M:C has a stereo output (panning, delay and reverb) so that could be an issue.

That’s a good point. Didn’t think about it so far. But yes, stereo would be nice when the M:C. That said, I would probably not sample the M:C at all with the DT – just sample the 0-Coast and use the M:C with line-in (for Overbridge).

Yes, of course. If portability is not important, the OT is my choice.

Well … MIDI capabilities with the M:S is quite limited compared with the DT or the OP-Z. And no line-in. Other than that, it’s probably fun and easy to use.

…u can make anything glitch, end of the day…

and even if not that obvious at first sight, the first thing that comes to mind is the ot indeed…

since u seem to have mastered the 0coast, i think ot is a serious recommendation here…
with the right and official hardcover it get’s pretty easy and solid when it comes to portability…
and besides it’s sampling, glitch and master arrangement capabilties, it would also make ur whole thing a compact mix hub tool that offers u the option to make that whole setup of urs become ONE instrument where ever u take it…

also keep in mind that all fx and summing master options would be also covered with it…
doing it right, would mean u could really achieve full productions, studiowise and performative stagewise with the very same setup and workflow…

Thanks! What you’re describing in terms of setup and mixing is exactly what I have in mind. My hope was to achieve something like that without the OT (just because of the portability).

…i see…but what’s portability to u ?

the ot might look a bit bigger in footprint, but as mentioned, with a hardcover it’s half the volume of a standard shoe box…in rock solid…

and that volume contains a mixer, an fx rack, a sampler, an arranger, a looper and a midi sequencer with arp mode…

ur cycles and ur o coast are both flat and light weighted…have some inbetween foam in which their knob surfaces can sink in safe and face them to ot’s hardcover top, have an attacheable strap around the whole thing and u’ll end up with little more volume of one shoe box in total, that fit’s every small sized average back pack of the planet in a handy, compact and travel sturdy sized package…that’s less than official handluggage on flights…so still enough room left for a pair of cans, that three powersupplies and a bunch of audio and midi cables…
even for a powersocket array that feeds all three AND some mobile powerpack to run them all even deep in da woods…

About portability: I would say anything which fits easily into a day pack. I’m trying to carry gear (or parts of my gear) to the office, for example. But I don’t necessarily need to carry everything – so it’s okay for me to have studio gear vs portable units.

It’s more important that the setup works as a whole. The „one instrument“ part of your answer is a very strong point for me.

The OP-Z is a no-brainer when it comes to portability. The BB as well (though heavier). The OT is not „portable“ for me – so that requires a bit of re-thinking.