How does everyone comfortably use their Elektron gear? I moved my Digitakt recently to my main computer desk and difference in use was remarkable. Being able to sit comfortably while easily programming it was wonderful and led to experimentation. My Analog Rytm + Analog Four are on the second tier of my two-tier keyboard stand and it’s such a drag of a setup.

I was moments away from pulling the trigger on a $900 Output Platform desk, I’d DIY one but I don’t have a wood shop at my house… I can’t see anything else that would easily contain my entire setup (one 5 octave keyboard, 3 Elektron boxes and some rack gear + all my PC stuff…

I’d tilt the second tier more, it’d help but not much and I’d risk my Elektrons falling off/losing a rubber foot at too steep an angle for too long… not worth it. I can’t shake the desire for a desk to better suit programming my boxes.

I’ve accumulated a large number of Elektrons and other synths and music computers and controllers. I repurposed my family’s old 1970 art deco looking formica kitchen table. There’s a short equipment rack with a mounted power distribution system placed behind that, and a big screen TV on top of the rack.

It’s nice to have an arrangement where you can scoot around on a chair with wheels, or stand and have anything you want on a stable surface easily within arm’s reach and essentially directly in front of you as it would be if you were using it standalone.

Things can sometimes become too spread out or far away. I played a lot of Tetris I’m when I was young and I feel that you sort of have to do that with the gear to get the positioning optimized! Get it all as close as possible with consideration to the necessary cable connections.

Adding a back row is not something I enjoyed doing since it means that some things were not comfortably within arm’s reach anymore. We can really only have one set of things in front us at a time anyway.

Prior to using the kitchen table I had a smaller desk and ran out of room after some excellent purchases. When I made the transition; I arranged all of the gear without plugging it in and shuffled it around as I decided the priority of how close it should be from me at the ideal listening position. That priority changes from time to time, and it just depends on whatever I’m trying to accomplish. I would go so far as to say that there was a bit of luck involved as far as how well everything has fit so far though.

It’s best to just use everything naturally and as much as possible simply allowing things to evolve rather that trying to engineer it too much ahead of time - since you may perhaps restrict yourself that way. I mean, it’s certainly an important thing to consider over time, as your needs may change.

the best “ergonomic” setups ive seen IMHO always have some sort of basic custom desk. nothing too specific, just plenty of desktop space. ive read you can even use unfinished solid doors from home improvement stores and just put some legs on them if you want a nice big desktop to work with.

Yea that’s precisely what it felt like. The new Digitakt position made it almost feel standalone. I didn’t even power on my other gear, I just went right for a Digitakt only piece… will it be finished into something I work on and produce? Probably not, but it’s great practice and using it was a joy.

I completely agree with that, and the only thing that I wish to add to my kitchen table improvised desk setup is more leg space, and maybe something to hold my computer keyboard and mouse since those always seem to be crowded.

Alternatively I could keep those on the surface with the Elektrons as it is currently - and have a drawer pull out for the K-Board Pro 4 that is currently competing for that space. The keyboard stand I ordered will fix this soon - but it poses other issues such as the fact that I’m running out of space in the room overall.

Also, with the keyboard stand off to the side I wouldn’t be in the ideal listening position when playing keys anymore, (I’m not using headphones).

With all the new stuff coming out we’re going to need to start looking into converting shipping containers into modular workspaces. I’ve got an Ikea “gerton” desktop with a sit/stand base. It’ll be enough to hold the trinity and some monitors + and ultrawide, but not much more… however I personally look forward to the day my problems are “running out of space in the room”! LOL

I once imagined a moving arm based solution where each piece of gear is mounted onto its own dedicated support arm which extends out and neatly routes the cabling without getting tangly. That would be difficult since ideally the arms would all be attached to a central point that somehow allows you to unlock, push stuff around to re-arrange and then lock the position of everything on the fly to resume playing.

I feel like it should at least be in a music video or part of a super intricate live performance rig that’s supposed to look very industrial maybe?

Edit: Here’s a picture of how things are looking right now. It is certainly not ideal… but it’s useable, evolving and becoming a lot more accessible as I engage with it over time. 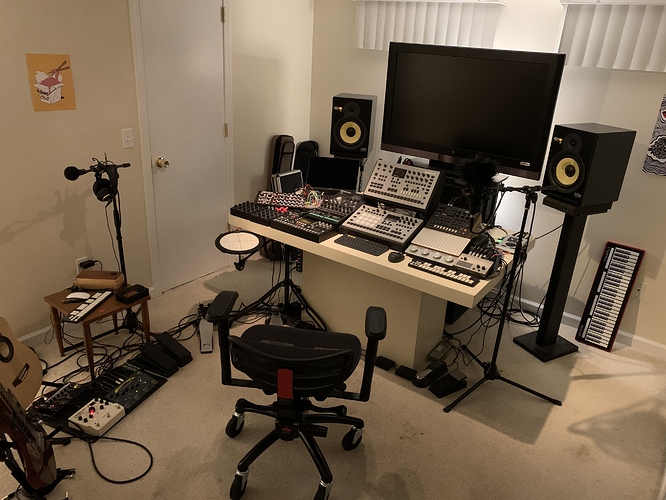 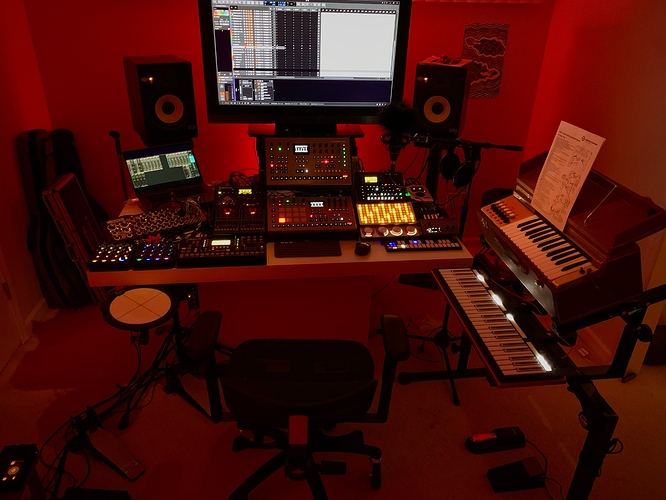 Right on the dinner table.

I have had some serious back pain this year, and I blame the desktop boxes. It’s of course not their fault, but I’ve only recently started to figure it out. If you’re in unideal situations: move around a lot.

My A4 is out of commission for a little while while the encoders are replaced, which has forced me to break up the band. Turns out it’s good for the brain, and for my back. Kind of like integrating the studio with life, I guess – there’s little stations everywhere. Not sure yet quite how I might combine them, but that’s as close as I can get to using hardware in a more casual, laptop-like way.

I’ll probably get a drafting chair, though.

The chair will make a huge difference. I went for a secret labs titan and my back problems have all but disappeared.

Ah! A friend of mine got one of those too and I shrugged them off as too pricey, not knowing I was potentially putting a price on pain.

I once imagined a moving arm based solution where each piece of gear is mounted onto its own dedicated support arm which extends out and neatly routes the cabling without getting tangly. That would be difficult since ideally the arms would all be attached to a central point that somehow allows you to unlock, push stuff around to re-arrange and then lock the position of everything on the fly to resume playing.

The price is no joke and you’re definitely paying a hefty premium for the brand, but the adjustability and comfort is great. Its a chair for people who are at their desk for 8-10+ hours a day.

With that being said - I think the secret labs chairs are the real deal - but there are probably cheaper alternatives that would do the job just fine.

Well it might not be everything you’re dreaming of but it works pretty well. The idea is the OT and rytm can rotate 100 degrees or so to accomodate either jamming (mainly spin the rytm in that situation) or sampling while outside the workstation (OT for that). The Parva is on its own arm, probably closest to your industrial octadesk vision! All three of these have a kind of cable snake that allows each to go in any of those 3 spots. Mostly use this to pop 1 machine onto the Parva arm for focus sesh on the sofa. Just kinda hovers in front of you, def the fave workstation mode. The moog and AK, vocoder, amp sim are set in place. Kinda makes sense for those pieces. 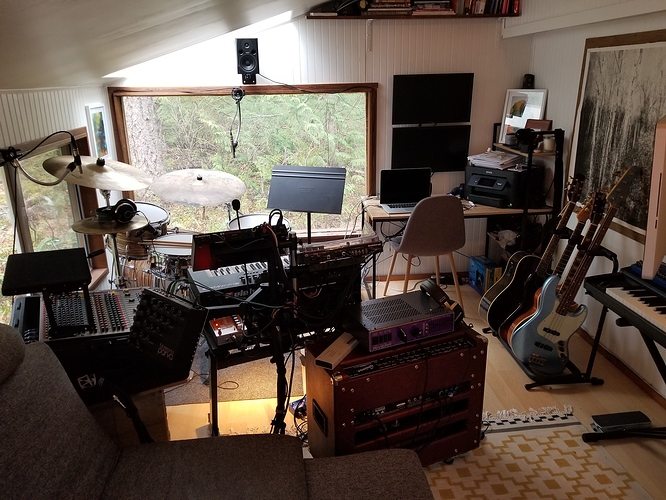 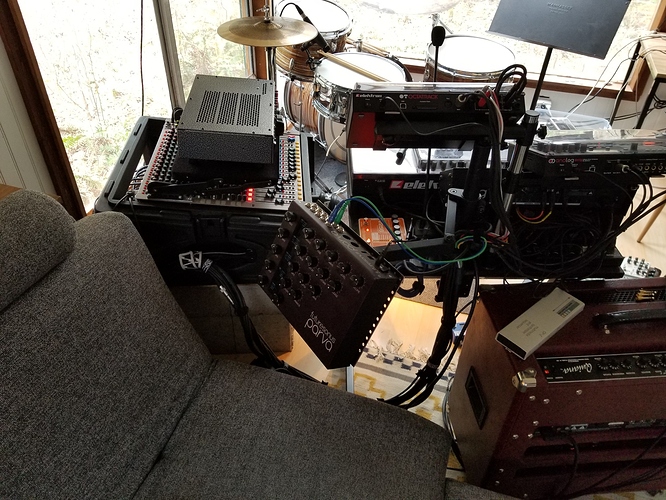 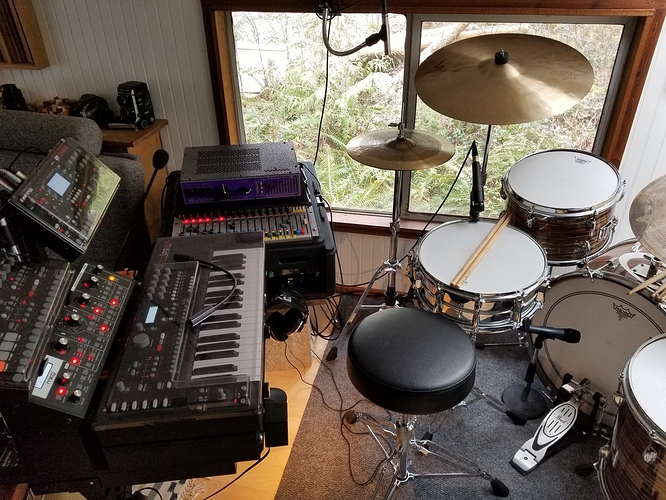 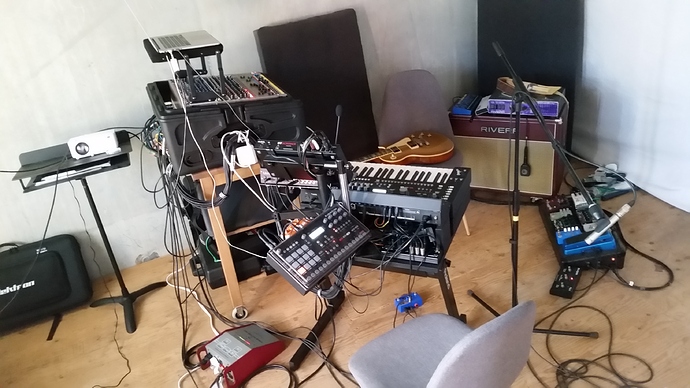 Woah, that is comfy lookin’.

Thanks! Just unhappy that it looks like this right now!

wow, your setup is rad! I am surprised you figured out a way to arrange all that gear.

Thanks! It was a labour of love. Many evolutions to arrive here and I’m super happy with where it’s at. When it’s set up!

The cable snake is a huge part of it. Crazy amount of weight. Lots of organizing there. (I wanted to actually do a 100 or so pin multipin cable but I was quoted about $1k for each splay on either end!) Have to be super careful to fasten it in a few places so it doesn’t weigh down its insert points. Midi is all on the stand. (Alyseum Al88c for the win) Both the mixer and the synth stand have power conditioners, so they aren’t light either.