So I can plug Keystep to DT and control the DN and XD via its midi tracks; but since i never use the Keystep to play 1-8 on the DT (its just transposing, not that necessary for me) I am wondering if plugging it into the DN wouldn’t be better.
Can i still use the DT as the main clock, being able to mute the rest and have midi track 1-5 for DN and XD? Or would the DN then serve that purpose.
What would be the optimal way to route this?

If you don’t need to control the DT, this is how I would plug this setup:

This way you can use DN MIDI tracks to control XD, and play both DN and XD with the Keystep.
Indeed, KS has a nice feature that makes it possible to switch from a MIDI channel to another in a blink (Shift + a key)

I would deactivate all DN MIDI channels except AUTO channel, so that what you select on DN is what you control from the KS
And set XD to another channel.

DN MIDI OUT → XD MIDI IN

By the way, to play XD from the KS with such config you would have to select DN MIDI channel (set to XD Midi channel beforehand) and play the KS on the DN Auto channel.

If you want your KS to be able to play on whatever gear you want, directly (ie without intermediate box in between) the best is to get a MIDI hub, such as MIO4 or Kenton’s.

With 3 pairs of stereo outs, I usually tend to get a mixer. Especially in this case, where DT sums incoming sound.
But if I were to use such trio, I would rather get DT in DN left Audio IN, and XD in DN right Audio In. they are both more or less mono, and you can send them in (excellent) DN FX if you need to expand the sound in the stereo field.

Can you still pass modwheel and pitch-bend from the KS, to the XD if you pass through the DN?

Via autochannel and with midi tracks enabled on the DN, the Typhon receive notes, velocity and aftertouch from the KS, but not pitchbend and modwheel information.

interesting. I do the recording via OB anyways so i could add panning there.
But im assuming the pan on the DT becomes useless then anyways.
I want to prevent buying another thang. DN was on sale but now i might keep it; but if i can use the DN/DT for audiorouting that will have my preference.

But havent considered just mono’ing them both into the DN: I would need a 2 to 1 Jack cable then i reckon…

No, use your stereo cable and just use one cable out of two. No need for anything fancy.
Do not use a dual mono to stereo cable, this would make no sense, and most likely not work (I don’t remember if DN and DT inputs are balanced or not).

Cool. Thanks for the help!
Ill try this. I was planning on doing XD>DT>DN audio. And then DN to my interface > monitors but this sounds a bit easier as well. is the XD fully mono? Aside from the ping pong delay that i can live without.
The DN FX i havent used that much: since they affected all DT tracks. And when recording via OB all FX were summed into one FX track which made editing a bit of a pain.

is the XD fully mono

If you can’t tell, it either is, or doesn’t matter much

working on getting this arranged. It helps me understand midi a lot better. Wondering: If i map everything in the settings (sync, channels etc.) am i then able to save that as a template project?

Allright m8 i Got it working. Just for others looking for similar solutions as a total nub:
Setting the XD to channel 10
Setting the DN autochannel to 10
Now if you put midi track one on channel 10 (press encoder) you just have to press the MIDI button on the DN and BOOm you’re playing the XD!

Now lets hope the Project can be stored as a template with all routing in tact.

All of this is saved with the project.
So you got your template.

Now that is epic. Thanks for the help man.
I got things going right away. And they 3 look DOPE together.

One thing thats worth mentioning: When recording via OB in Ableton you’ll have to record the XD as the DN Input L / Input R. Since its only routed via either L or R the XD comes in very softly via the Right channel only. This is of course solved by rerouting the cable but that ain’t fun

I found a fix: Using Utility and only passing the L or R channel.
Any other fix is welcome./

@LyingDalai Hi, can I bother you with a question following your candid advice?
Below is the setup you advice and it works quite well; but I wonder if I do need a mixer since recording the XD is a bit of a pain. Also; I already have the 4i4 and I prefer to have as little as possible; due to desk space and investment. Would routing the XD to the DT and the DT to the DN (audio) reduce the quality of the XD? since you said the DT sums the incoming audio in to mono, but in the current setup its mono anyways. Ideally I would route the XD to the DN, having access to additional FX, and the DT to the 4i4; but I only have a mono input free on the front.

I reckon the whole issue is gone once I buy a Small mixer that lines into the 4i4; having the benefit to allow me to just One Track everything into ableton if i want to record a single Audio track and do the mixing dawless. 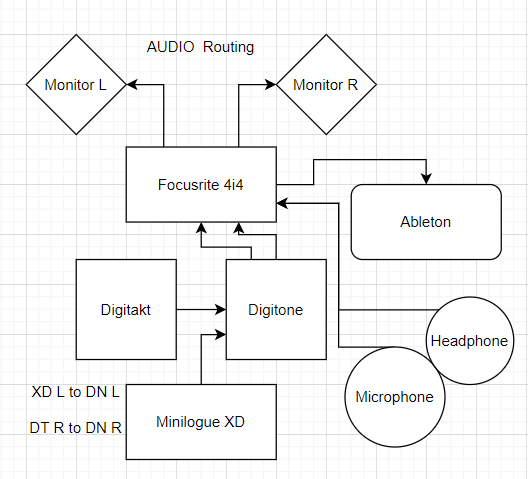 If you always use the computer while playing and recording, you might like a different setup. The one I suggested was more a live-like setup without computer.

You can record directly DT and DN through USB Audio or Overbridge, and even use DN as a soundcard.
DT sums up both inputs + needs the recording to be armed so it’s less interesting in this regard. And doesn’t make it possible to add FX.

So if you always use your computer while playing, such setup could be interesting (DT alone, and XD audio outs to DN audio ins)

But yes, a small mixer could simplify this setup, and make it possible to have the same setup for live playing without a computer, and to record with it.

yeah ill get a mixer then. I prefer to play without PC; i need it to be on for the 4i4 to be on, but I don’t look at it. I want to use it just for recording.

Ill get a cheap ass mixer. Behringer has cheap stuff.

Then i can do mixer into 4i4.
Thanks a bunch man!

If I may, there are threads here about mixers.
I personally prefer one that can record in multitrack, so that I don’t need a soundcard.
And Aux sends/returns are pretty useful (add external FX or record whatever into DT)