So after a 3.5 year wait, I reached top of the Cirklon sequencer wait list! I am debating whether the new Cirklon 2 sequencer is worth buying for over 2k now in 2021 or not. I have several modular sequencers already that do a pretty decent job, plenty of modular clocks and other synths that have sequencers like my Elektron A4+OT, Moog Sub 37 and so forth. Would be great to hear from folks who have one and if they are worth the cost and hype.

It’s all relative isn’t it. Some most certainly will say that it is, and is the best sequencer ever created, while others not so much. I think that if you’re rationalizing as much as you are, you might doom your chances of enjoying it, and instead focus on the negatives, ultimately regretting your decision and mental beating yourself up.
Go through the common questions. Does it provide something I don’t have? If no, then does it do that something better? Is it something I can comfortably live without? Etc.

I myself finally made it to the top of the Pulsar list, but gave my spot away because upon thinking about it, I couldn’t justify spending that amount of money on it. As much as that pained me to do, because after all the Pulsar is a really awesome instrument that anyone would be lucky to have, I didn’t have any necessity for it.

Don’t buy it, that’s one less person between me and my waitlist slot.

Seriously though, these things are gold on the secondhand market and there’s no indication this will change anytime soon. If you decide you don’t like it, you will at minimum recoup your cost, or even make a decent chunk of change.

see that is the problem I have now in 2021 paying 3k for just a sequencer Cirklon v2 color or not. Especially now that I already have an eloquencer and metron for my modular systems and good Elektron gear and clocks to sync them via CV or MIDI. I watched the Cirklon videos and if I had a bunch of external hardware synths maybe worth it now. But 3k would get me a new Rytm MK2 plus some new eurorack modules and case. Tough to stomach.

Back in 2017 the cost was around $1500 if you could manage to get one from Sequentix. But the prices on Reverb are ridiculous, I seen one going for $4000.

The Cirklon price is becoming less justifiable now that a slew of affordable innovative sequencing solutions have appeared on the market, though none of them are as comprehensive and ‘boo-teek’ as the Cirklon. If you have the need for its unique features and can afford it, go for it, you only live once. And if you don’t need it, sell it for the same you paid.

I am debating whether the new Cirklon 2 sequencer is worth buying for over 2k now in 2021 or not. I have several modular sequencers already that do a pretty decent job, plenty of modular clocks and other synths that have sequencers like my Elektron A4+OT, Moog Sub 37 and so forth.

Do you know what the Cirklon can do?

Would it help you make music?

Get an atomic clock instead.

It is probably safe to say that if you don’t like it you would probably have no problem to recoup most/all what you paid due to the waiting list. So if it were me and I was unsure I’d go for it, if I thought I most likely would not need it I’d cancel and let someone else take the place in the list.

Back in 2017 the cost was around $1500 if you could manage to get one from Sequentix. But the prices on Reverb are ridiculous, I seen one going for $4000.

that’s Reverb. that’s not the resale price. and it just reflects the rarity of the Cirklon. direct from Sequentix they’re 1440 euros, which is about $1700 (usd). the CVIO one is about $2050. so, if one is after a Cirklon with CVIO and a breakout box, it’ll be about $2500. not sure what shipping/taxes are; maybe another $150. but you’ll pay those if you buy on Reverb too.

@sacguy71 if you’ve waited 3.5 years I’d think you would’ve made up your mind by now. but I get that your process/workflow changed and adapted to the lack of the Cirklon being there. if you have the cash, I’d say give it a shot and maybe see what you’d do with it and what it does to your workflow without using your other sequencers. could be good, could be bad. regardless, you won’t lose money in reselling it. even if you’re not some a-hole selling it for $4k, you’ll at least make your money back.

I do get your sentiment though that it’s best for controlling a bunch of hardware. that’s 100% what it’s meant for; I’m using it with 20-ish synths/machines. that instrument list is a god-send. as are the cvio setup/scaling options. little stuff is just so streamlined, well thought-out, and intuitive. almost always when you think “I wonder if it can…” the answer is “yes!” BUT I will say you can do a large chunk of what it does in Ableton, if you’d prefer to work there. you may have to add a DC-coupled interface for CVIO control, or a bunch of midi-cv converters. but it’s a different workflow, obviously; the Cirklon is meant to be the center of a hardware-based studio, for people that want to sequence with hardware.

@chiasticon the problem is bad timing as I just spent a ton of cash on modular gear last month so right now I have more eurorack than anything else and use my eloquencer and pamela new workout to master clock my setups and that workflow is perfect. I also have a metron and stillson hammer for sub sequencers. Now if I had a dozen hardware synths then yes, I’d pull the trigger today and buy the cirklon v2 but I don’t since I went eurorack path last year and love it. I still like my Elektron gear and Moog Sub 37, but having a large master 14u modular system with two 6u cases is my main rig in my studio now.

Maybe @ObscureMachines can chime in with their experience? 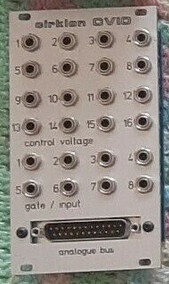 having a large master 14u modular system with two 6u cases is my main rig in my studio now.

obviously it’s your call. one thing’s for sure though: backing out now means you missed your chance for at least a couple years, possibly way more. or you’ll have you to overpay to get the same thing second-hand (or the V1). that’s what makes it a tricky decision…

I’ve been using an IOLabs Flux with Befaco’s VCMC, and I’ve recently ordered the MIDI add-on for my Eloquencer:

I’ve watched those long Cirklon 2 demos (in a distracted way). Aside from its ability to set up individual machine configs (which I didn’t watch closely enough to fully grasp that feature’s utility), I wonder how my little sequencing skiff compares? I should mention that I also have a mioXL, so I’m able to set up different MIDI routings and stuff. I have three years on the Cirklon wait list to discover what it might add to my config. The Cirklon is all-in-one, and my skiff’s total cost actually comes to a bit more than the Cirklon, so there’s that.

One thing that drives me crazy about all these damn step sequencers is the lack of a bird’s eye view as to what’s going on. I guess only a computer, with its big screen can provide a big overview. Polyend Tracker competes: it’s basically a small screen computer with a more tactical—but still mostly button—interface. While I’d be fine, though, sequencing from a computer keyboard (due to its tactility and rewarding muscle memory), something like Renoise has always been a non-starter for me due to the endless mousing around. I know Renoise allows doing a lot from the keyboard, but it’s not enough from what I can tell. Your mouse is your basic killer of musical feel, having no muscle memory and knocking you out of a physical connection to your groove. I’m looking at live coding as a something that feels good and musical to interact with in real time (I’m a touch typist), and I must say, I’m really liking how Sonic Pi gets away from the step sequencing paradigm. But still: it’s a computer.

agree that is what I really like about my WMD Metron and Winter Modular Eloquencer sequencers for eurorack modular stuff. I can see the sequence for multiple tracks at same time and quickly change one or multiple tracks easily as well as switch to random, reverse or other variations on the fly. I came up with this today after work: 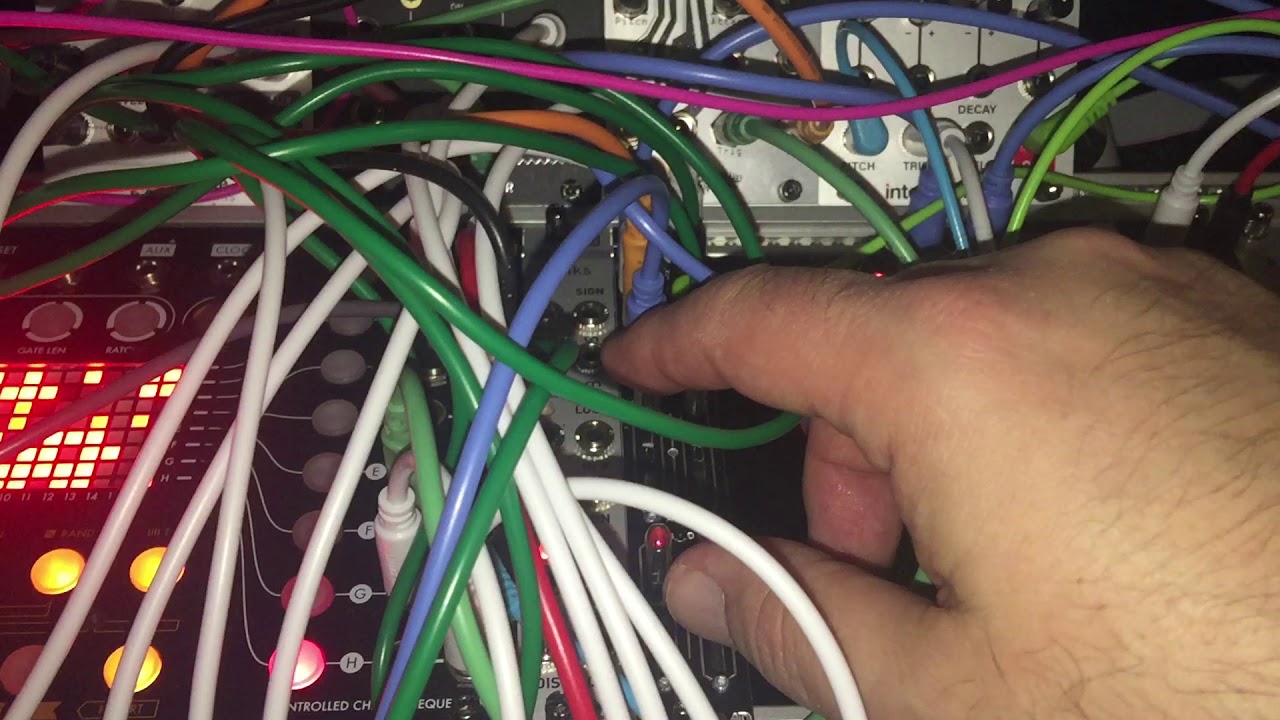 Now I have a fun powerful modular setup with multiple sequencers, clocks, modulation sources and plenty of percussion and bass for house and techno in eurorack. I still want a Rytm to go with my A4 and OT at some point plus makes an all in one techno monster easy to carry around.

yeah, see the Eloquencer not only makes it easier to track visually what’s going on better than the average sequencer, its generous button interface provides an ergonomic performance experience.

agree the eloquencer is my favorite eurorack modular sequencer now and WMD Metron is fun as well for percussion jams.