Got a digitakt on the way soon hopefully and would like to pair it with a synth such as the Korg MS20 mini or Moog Sirin, that I would sequence from the digitakt.

I currently use a Focusrite Scarlett 2i2 audio interface with my laptop which doesn’t have midi in/out or line inputs, so won’t be able to take any input from the synth and would rely on me using overbridge for the digitakt.

My question is, what is the most efficient way to overcome this problem, buy a new interface such as the 8i8? Or get a small mixer? Or even use the digitakt as a mixer by routing the synth into the Digitakt inputs? But that’s mono so kills the stereo image.

Any ideas would be great

Use the Digitakt as an interface. Both of those synths are mono anyway, right?

Agree with above. And if you use overbridge you can break out and record each of the channels separately including the input from the DT. This is how I use my DN and Volca Drum. So it’s digital straight over USB into the DAW. A mixer would solve the problem too. Don’t cheat yourself by getting a 2 input mixer though if you do, because if you get more gear you’ll just want a bigger mixer anyways. I have a Yamaha 10XU and I still want more channels and I don’t even have a super lot of gear!

The scarlet DOES have line inputs though doesn’t it? I thought it had 2 1/4” jacks. They look funny because you can plug a mic too.

One question, I assume you’re using single line outs from DN and Volca into the DT? If so, does the DN not lose it’s stereo image?

Oh I don’t run the DN into the DT - he’s it would lose its stereo image. You can do it the other way around though. I was just giving an example of the 1 usb cable solution.

Usually I would run the Volca Drum into the DN because I like to pan my drums around and with just a smidge of overdrive / reverb on the master inputs. Makes the Drum sound so damn good! The DN into the mixer. The DT straight into the mixer. Monologue straight into the mixer. Lately I’ve been playing with AUX out and a reverb pedal (even though there is no dedicated AUX in in my mixer I can use an empty channel and it works pretty decent. Can’t ever get 100% wet effects though I don’t think)

Anyways yes be creative with your limitations. Think of every possible combination you can with what you have. Some of it will suck but some of it will be good and you’ll know for sure what you need to take your sound to the next level.

Just took a look at the MS20 Mini - WOW! As a synth by itself I bet it sounds amazing. I believe, someone correct me if I’m wrong but the monologue filter was based on the MS20? If I had the monologue with this many routing options I’d crap myself because the monologue sounds amazing and it’s pretty bare bones but there are some tricks you can pull off with the self oscillating resonance and keytracking and modulation recording lanes. If you get the MS20 Mini, check this! 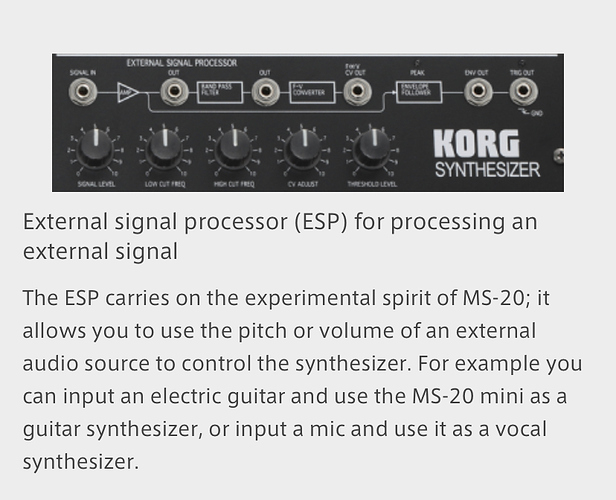 Plug the DT in as a sound source and play samples into it and then record the output back into the DT to sequence. It would be like a self contained sound ecosystem! Let us know how it goes!