Compared to a lot of “today’s” synths the Snow has many more features so I think it has aged remarkably well.

With regard to "the unashamedly digital sound", to my ears it sounds no more digital (or less analogue if you like

i don’t know about Ti, but B is still relevant

Can’t comment on the C or earlier, but I’ve owned 2 TI’s. The 1st time around I became so frustrated with trying to get the TI bit working and never succeeded and ended up selling it. The 2nd time around I promised I would use it as a hardware only and not be tempted by the TI aspect, however I have recently and using a dedicated PCI-E card have it working close enough to perfect. So it is possible. I do use it to sequence from the Elektrons, but I use a DAW to route midi and record to Stems.

The capabilities of the synth are unmatched in hardware, if you like to program sounds it’s very easy to edit from the machine and very well designed I think. If you use presets it’s a monster with an absolutely massive amount of ROM Presets. You can even replace those banks by flashing your own to it to replace them. I think of of it as something like Dune II in a hardware box with a hardware interface. Some of the features are very unique.

Sound wise it sounds great to me, I’m not an analogue snob, I like all synths and actually prefer the flexibility of digital from a programming perspective. The FX really shine, as others have mentioned the tape delay is fantastic. I think you get 7 FX per channel which you won’t get with a previous Virus which is very unique in a hardware synth and probably it’s strongest plus point. Lately I have been using a channel purely as an FX channel for processing external audio and it’s fantastic for that!

The downside of all of this capability is that resources are finite and polyphony is reduced by the complexity of your presets. But in practice I don’t tend to use more than 5-6 channels and haven’t run into any issues even using multiple reverbs.

Personally I wouldn’t recommend a Snow considering you can get a mk 1 desktop for not much more (which is what I have). The Knobs/hardware are very important to me, and use them even when using the plugin, which is liberating. I think with the Snow you would certainly need the TI integration to be working if you want to do any synth design, and it has just 1 DSP chip and is limited to 4 parts multi-timbral. I would use VSTi’s rather than a Snow personally, it lacks all of the good things of the desktop.

One thing to bear in mind is that the TI plugin is seriously convenient for saving the working state of the machine and using it purely for that is liberating. On the other side there are 16 multi’s Which behave the same way and store working memory which is great, however the rest of them are traditional referencing Multis which just point to existing presets (like most other hardware synths).

The issues people have with TI is that you get crackles on the USB inputs (which is now solved for me) and ARP Sync is unreliable. You can bypass the crackles by selecting the audio outputs instead from the plugin presets. If you don’t get the crackles it means you have access to 6 stereo outputs which is very useful. As for the ARP Sync issue, it’s now working great in Cubase for me, however problematic in Bitwig when not starting from the 1st bar. Personally I think it’s down to Access inability to track the clock correctly, if they restarted it on a note instead it would be much better. If you plan using the user ARPs they need to be programmed via the GUI, but work perfectly in standard midi mode…

Overall it’s hard to understand why anyone wouldn’t get on with the TI as a hardware synth, it can do so much, you are just limited by your imagination. Having multiple outputs and dedicated fx per channel is fantastic, and the hardware/Knobs is very solid. Editing is very easy even in multi-mode, there are dedicated ‘part’ buttons for navigating the channels.

Total Integration is the Godfather of OB…bold but just sayin…

It also took a long time to implement properly, and there were many problems…but works for me just fine now…Kempfer was light years ahead, Elektron are still trying to figure out many things kempfer could do with just usb 1…

My T1 snow is 3 stereo out and 1 in with pc / mac automatable controll over the hardware via a plug in stand alone or vst. YES over usb 1…and that was a decade ago…2008 i got mine…still rox…

Yup did my research before posting here and the Sonic Lab one is from NAAM in the mid 2000s. I trust the folks here more than the random reviewer on youtube, which I have re-watched a few times. Seems like a lot of psytrance was made with this machine and trance is just NOT my thing.

No problem. I just meant those old reviews from when it first came out could be helpful for comparisons to how the TI departed from the “old” Virii…

And I never used mine for any kind of tarnce, psy or otherwise.

when I used mine regularly it was primarily for dreamy and pretty sounds.

It’s a very diverse & capable Synthesizer, like any synth you get the sound you program, I don’t think that any synth is tied to genre, but may be popular for a particular genre. It’s probably good for Trance because of the programmable ARP and it has very fast envelopes and a good fine range of control at that end of the parameter. As a result it does pluck type sounds extremely well. I’m not really a preset person, but I wouldn’t say that out of the 4000 presets there isn’t really a massive trance theme to them when I have gone through some of them.

In terms of videos track down the official Access OS5 videos which demonstrate some of the features added. I think there’s also some OS4/4.5 ones. Many great features where added at this time, and are demonstrated in these vids.

In terms of videos track down the official Access OS5 videos which demonstrate some of the features added. I think there’s also some OS4/4.5 ones. Many great features where added at this time, and are demonstrated in these vids.

Good advice. I think they were done by Ben Crosland, if that helps you find them. Also, the documentation is a bit of a mess, so make sure you read through the addendums. Lots of awesome stuff was added over the years, as @kosmology points out.

Here you go, they’re a few videos down in this playlist:

Edit: I don’t think they are all in there though, but they will be on that channel.

Oh sorry, i own a MKii but would trade the MKi,

Then again i paid less for my mkii second hand than for the virus new. But there looks to be a considerable price difference 2nd hand so…

Price wise mki and a snow is fair enough. But the $ between the mkii and a snow would mean it would be crazy to trade.

I have the Ti snow and it is excellent if you don’t mind the daw interface. Incredibly powerful, really decent for dark moody jungle. I’ve actually bought it twice, because I stupidly sold it once…never will I make that mistake again though! 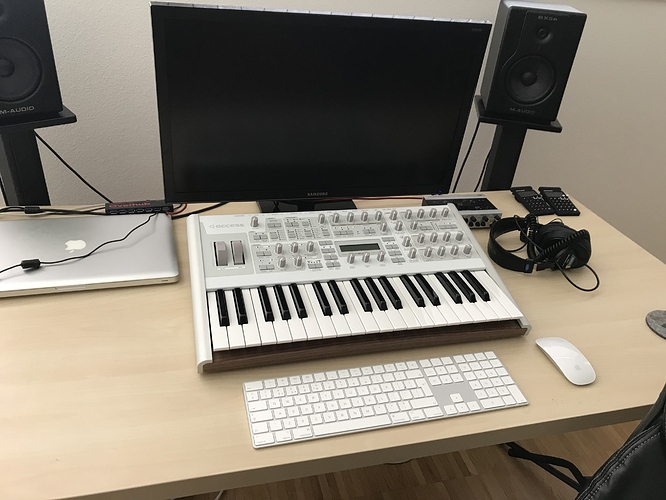 Thanks folks I bought the Virus TI desktop this evening:)

I have been having difficulty sending midi notes from the OT to it though. Here is what I have tried:

No notes or clock is getting to the Virus though - please please help, I’ve looked through the paper Virus snd OT manual and still can’t get notes to play when I use chromatic note mode on the OT.

Not sure what you mean by auto mode on the Virus?

Put the virus in Multi Mode, now it will respond on all 16 channels. Set the OT track Midi Channel to 1 and that will play part 1 on the Virus. Auto channel is just for playing the currently selected track, your Keyboard needs to send on that channel and it will play whatever track you have selected. No Midi will be sent out from the OT on the auto channel unless you have a track set to 11, but understand that each midi track will only send midi to the channel the track is set to use. Auto is for your keyboard so you don’t have to change channels to match the track every time you select a track.

Sorry I’m a bit tired that was probably confusing… I think what you are missing is that you haven’t set the midi track to a channel. To activate the channel, you need to push the encoder and select a channel. Read the Octatrack manual relating to midi track.

If the virus is in multimode it will respond with a separate instrument on each of the 16 channels. Use the part buttons to navigate through them and select sounds.

Hopefully that was a bit more helpful

I will try all of this tomorrow and report back. To activate the channel which encoder do I push? Do not just select the track by pushing the T1 button in midi mode on the OT? I will go over the manual and give it a go. Thank you again.

Select track, on the first edit page (I think) you will see ‘channel’ push the corresponding encoder to activate, it will then let you choose a channel. Without doing that it won’t send any midi.